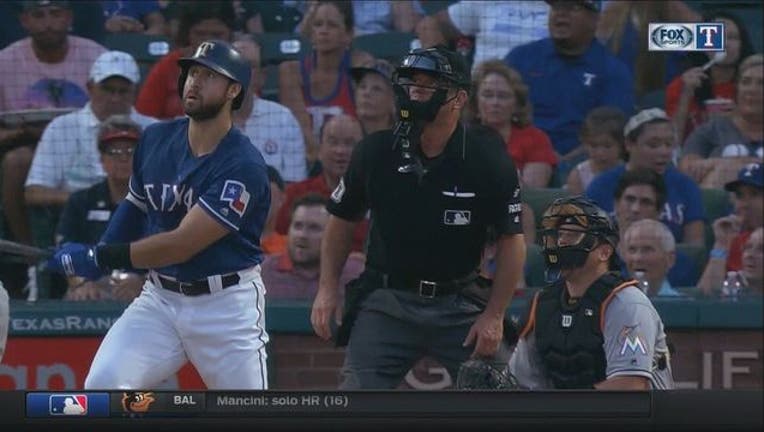 When Gallo led off the third inning with a towering blast into the second deck of seats, Marlins right fielder and MLB home run co-leader Giancarlo Stanton never even moved. That broke a 1-all tie and put the Rangers ahead to stay.

Gallo then led off the fourth with a liner into the seats near the right field corner for his 25th homer, and Odor's 20th came leading off the fifth made it 7-4.

Adrian Beltre was 0-for-3 with the sacrifice fly and a walk to remain at 2,993 career hits with seven games left in the Rangers homestand. His 1,603 career RBIs are 32nd on the all-time list.

Christian Yelich drove in all four of Miami's runs, including a three-run homer. He also had an RBI on the first of his two doubles to put the Marlins up 1-0 in the first.

A night after Beltre had four hits while the Rangers were shut out in the series opener, they had another 10-run game with Cole Hamels (5-1) on the mound. They finished with 15 hits and a season-high 31 total bases. Carlos Gomez was the only Texas starter without an RBI, and the only one other than Beltre without a hit.

The Rangers have scored 10 runs in four of Hamels' 11 starts this season. The lefty allowed four runs and six hits over six innings, with five strikeouts and two walks.

Napoli was hitless in 14 at-bats before his 22nd homer in the second, and he added a double an inning later. ... After Gallo's homer to start the third, Nomar Mazara snapped an 0-for-26 slide with a single and scored on a bases-loaded infield single by Jonathan Lucroy that ended his 0-for-22 slump.

Marlins: Slugging 1B Justin Bour was put on the 10-day disabled list with a strained right oblique sustained in the series opener Monday. SS JT Riddle (left biceps tendinitis) was put on the DL, retroactive to Saturday.

Rangers: RHP A.J. Griffin is an option to start Saturday after his third rehab start since a strained oblique in late May landed him on the 60-day DL. RHP Tyson Ross, who would have pitched Saturday, is on the 10-day DL with a blister on the index finger of his pitching hand.

Yu Darvish (6-8, 3.44) is scheduled for his last start before Monday's non-waiver trade deadline with growing speculation that the Rangers could deal the potential free agent to another team. His only career shutout, and only nine-inning complete game, came in his only previous start against the Marlins three years ago. He could face Ichiro Suzuki, another standout player from Japan.