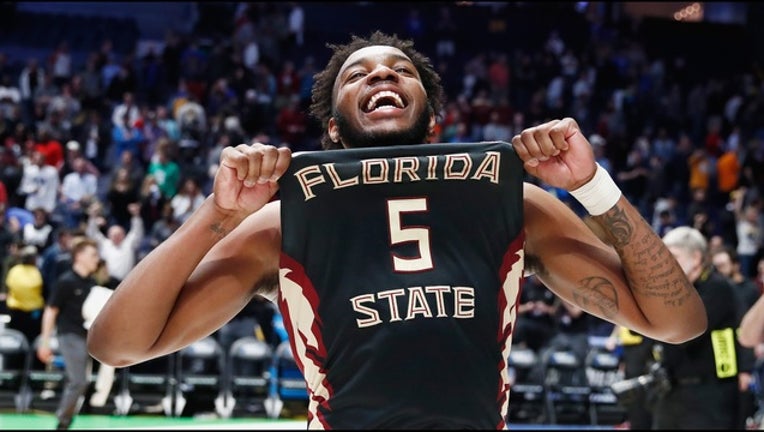 PJ Savoy of Florida State reacts after defeating Xavier during the second half in the second round of the 2018 Men's NCAA Basketball Tournament at Bridgestone Arena on March 18, 2018 in Nashville, Tennessee. (Photo by Andy Lyons/Getty Images)

NASHVILLE, Tenn. (AP) - The Florida State Seminoles are on their way to the NCAA Tournament's round of 16 for the first time since 2011 after upsetting top-seeded Xavier with a furious comeback.

PJ Savoy made a 3-pointer with 1:08 left to give Florida State its first lead of the second half, and the Seminoles rallied from a 12-point deficit to beat the Musketeers 75-70 on Sunday night in the second round of the West Region.

The Seminoles made Xavier the second No. 1 seed ousted in tournament's first weekend, sending the Musketeers out along with Virginia. Now Florida State (22-11) will play fourth-seeded Gonzaga on Thursday night in Los Angeles.

Savoy also hit a pair of free throws with 21.6 seconds left putting Florida State up 73-70. Kerem Kanter shot an air ball from beyond the arc at the top of the key with 7 seconds to go for Xavier, and CJ Walker added a pair of free throws with 6.4 seconds remaining. Terance Mann picked off a long pass by Paul Scruggs off Xavier's inbound pass before running in front of Seminoles' fans to start the party.

After jumping around on the court and hugging, the jubilant Seminoles ran over to their fans in the stands and slapped high-fives.

This was sweet payback for Florida State after then-No. 11 seed Xavier routed the Seminoles 91-66 a year ago in the very same round in the same region.

Xavier coach Chris Mack had four starters back from that team that wound up losing to Gonzaga in the Elite Eight, and Florida State coach Leonard Hamilton lost his top three scorers - two to the NBA Draft.

The Musketeers didn't get the chance to run away this time around after they took a 12-point lead. They led 56-44 with 10:42 left, and a free throw by Trevon Bluiett gave them a 66-57 edge. But Xavier didn't score a field goal after Kanter's jumper with 3:56 left for a 68-66 lead. Mfiondu Kabengele scored his second straight bucket tying it up at 68 with 2:32 to go.

Scruggs hit two free throws with 1:49 left, and that was the last points for Xavier. The Musketeers turned it over three times after that, twice by star Trevon Bluiett, as Florida State finished the game scoring the final seven points.

Braian Angola led five Seminoles in double figures with 16 points. Trent Forrest added 13, Savoy finished with 11, and Phil Cofer and Mann each had 10.

Florida State: This will be just the fifth Sweet 16 appearance for the Seminoles and second under Hamilton. ... The Seminoles had lost their first two games against No. 1 seeds in the NCAA Tournament, losing to Kentucky in 1980 and 1993. They also beat Xavier for the first time in three tries.

Xavier: The Musketeers had been 23-1 when allowing less than 80 points. ... Macura fouled out with 2:06 to go, and Bluiett finished with just eight points and five turnovers.

Xavier: Mack will have to replace Bluiett, Macura and Kanter.