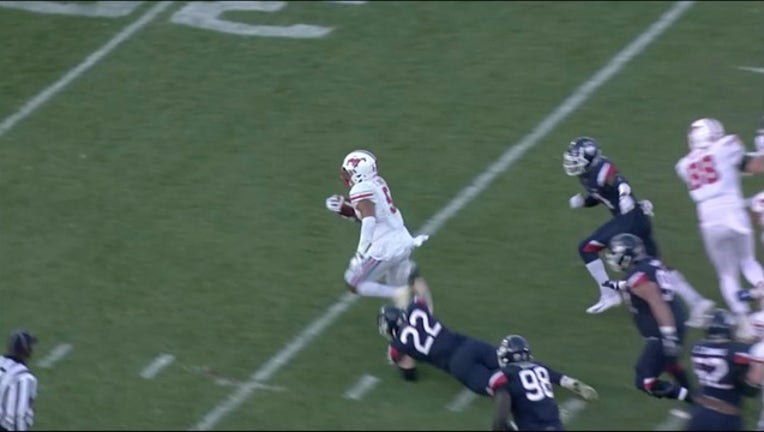 EAST HARTFORD, Conn. (AP) - SMU has all its running backs healthy and the Mustangs may just rush their way into a bowl game.

Ke'Mon Freeman and Xavier Jones each ran for more than 100 yards and combined for five touchdowns as SMU outscored UConn 62-50 on Saturday.

"We told (the defense), 'We got you all's back,'" Jones said. "We told them, 'They can't stop us. If you can't get them off the field, we're going to keep scoring, so we'll just outscore them.' That's what we did."

After an 0-3 start, SMU is now one game away from being bowl eligible.

"We got hungry," Jones said. "Every week we got better. We're one win away from being bowl eligible, but shoot, we're still planning on playing for the conference championship."

UConn stayed in the game thanks to quarterback David Pindell. He threw for 215 yards and four touchdowns ran for 181 yards and two others. He becomes first Husky quarterback to ever to rush for 1,000 yards in a season and the first UConn player to do it since tailback Lyle McCombs in 2011.

SMU's first five drives ended in scores and the Mustangs led 31-10 at the half. UConn scored 40 points after intermission, but could not stop the Mustangs from answering.

"I'm proud of the team because they didn't give up," Pindell said. "They kept fighting and they gave us a chance to win."

The Mustangs also broke out a few trick plays. Receiver Tyler Page took a pitch then threw a 3-yard TD to tight end Ryan Becker to make it 24-7. A 46-yard flea-flicker and a one-handed catch from James Proche, set up a Braeden West rushing touchdown.

Freeman has battled a shoulder injury this season and Jones has struggled with leg issues.

"That was a big deal, having them back healthy," said coach Sonny Dykes.

UConn, which has given up more than 50 points six times this season and 49 points in two other games, hasn't beaten an FBS team since October of last year.

"When you go and play on the road, your run game usually determines if you're going to win," said coach Sonny Dykes.

UConn linebacker Eli Thomas, who suffered a stroke a month ago, walked onto the field before the game to participate in the coin toss.

"He surprised us last night at the team dinner," Pindell said. "Nobody knew he was going to be there and everybody was all surprised and happy for him."