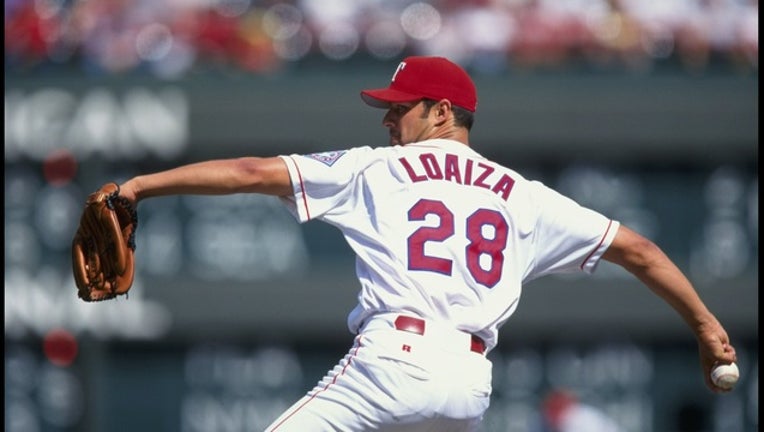 12 Apr 1999: Pitcher Esteban Loaiza #28 of the Texas Rangers winds up for the pitch during the game against the Anaheim Angels at the Ball Park in Arlington, Texas. Mandatory Credit: Stephen Dunn /Allsport

The 46-year-old former Major League Baseball player was booked Friday on charges involving the possession, transport and sale of 20 kilograms (44 pounds) of suspected cocaine worth an estimated $500,000, according to the San Diego Sheriff's Department. He is being held in lieu of $200,000 bail.

It was not immediately known if Loaiza has hired a lawyer. He could not be reached for comment.

The packages containing a white powder are still being tested but are believed to be cocaine, though other drugs could be involved as well, said San Diego Sheriff's Lt. Jason Vickery.

The arrest was part of an ongoing drug probe.

Officers stopped Loaiza for a minor traffic infraction Friday after he left a home he started renting recently in the Pacific coast community of Imperial Beach, along the U.S.-Mexico border. Authorities had the vehicle under surveillance on suspicion it was used for smuggling drugs.

When they searched the vehicle, they found a sophisticated compartment used to conceal contraband, authorities said. That led them to obtain a search warrant for Loaiza's rental home, where they found the packages of drugs, according to investigators.

Loaiza, who was born in Tijuana, Mexico, was briefly married to the late singer Jenni Rivera, who died in a plane crash in 2012.

This story has been clarified to show that the packages of drugs are still being tested and are suspected to contain cocaine but could also involve other drugs.