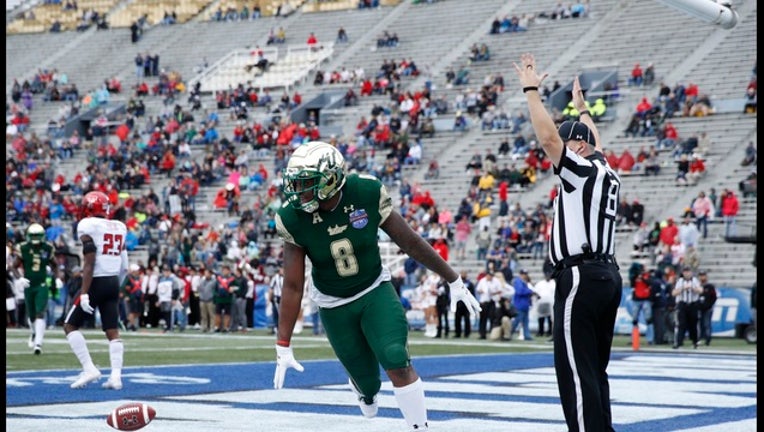 Tyre McCants #8 of the South Florida Bulls reacts after a touchdown reception against the Texas Tech Red Raiders in the first half of the Birmingham Bowl at Legion Field on December 23, 2017 in Birmingham, Alabama. (Photo by Joe Robbins/Getty Images)

BIRMINGHAM, Ala. (AP) - Tyre McCants caught a 26-yard touchdown pass from Quinton Flowers with 16 seconds left to lift No. 23 South Florida to a 38-34 victory over Texas Tech in the Birmingham Bowl on Saturday.

Flowers lifted the Bulls (10-2) to a second straight dramatic victory in the bowl game at Legion Field, throwing for a pair of touchdowns in the final 4:26.

The Red Raiders (6-7) had taken the lead back with Nic Shimonek's 25-yard touchdown pass to a wide-open T.J. Vasher in the end zone with 1:31 remaining. That left Flowers with plenty of time to work, it turns out.

He ran 13 and 21 yards for first downs, the latter coming on a third-and-10 play. Then he found McCants on their second scoring connection.

The senior passed for 311 yards and four touchdowns in this one. He also ran 14 times for 106 yards and a fifth score. Marquez Valdes-Scantling gained 133 yards on three catches.

Shimonek took Texas Tech across midfield in the final seconds but his desperation pass on the run was well short of the end zone.

Shimonek, who had led a fourth-quarter comeback in the regular-season finale against Texas, completed 32 of 59 passes for 416 yards. He threw for three touchdowns and was intercepted twice on deflected balls.

Keke Coutee had 11 catches for 187 yards and a touchdown while Justin Stockton ran for 103 yards.

Texas Tech: The Red Raiders couldn't translate a 249-130 edge in first-half yards into an advantage on the scoreboard. They converted 10 of 19 third downs.

South Florida: Flowers had a terrific second half after going 4-of-14 passing for 52 yards in the first. ... Defensive tackle Deadrin Senat had three first-half sacks for South Florida, matching his season total coming into the bowl.

Texas Tech: Shimonek and leading rusher Stockton are seniors, but all but two defensive starters have eligibility remaining. Coutee is a junior.

South Florida: The Bulls must replace Flowers, a three-year starter, plus leading receiver Valdes-Scantling and tailback D'Ernest Johnson on offense and eight starters on defense. Leading tackler leaves behind Auggie Sanchez a big hole to fill.