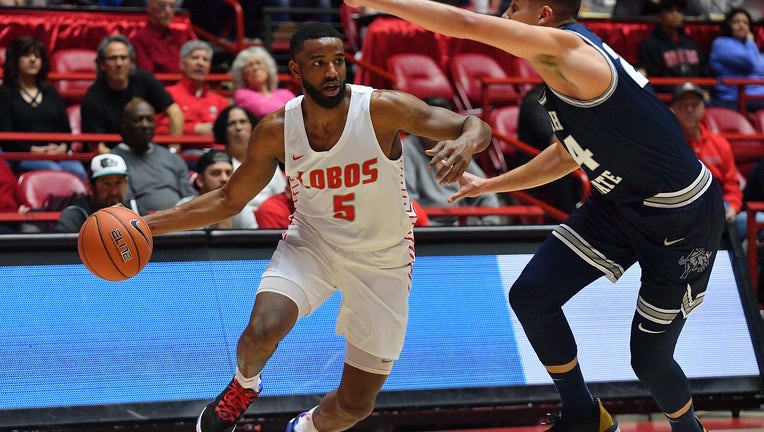 ALBUQUERQUE, NEW MEXICO - JaQuan Lyle #5 of the New Mexico Lobos drives against Diogo Brito #24 of the Utah State Aggies during their game at Dreamstyle Arena - The Pit on February 29, 2020 in Albuquerque, New Mexico. The Lobos defeated the Aggies 66

UNM is relocating both the women’s and men’s teams, hoping to take advantage of laxer COVID-19 restrictions in the Lone Star State, according to the Santa Fe New Mexican.

New Mexico is under a two-week shutdown of nonessential businesses, which started Monday in an attempt to curb coronavirus spread. Under state guidelines, athletic departments don’t allow games or workouts of more than five people, and anyone who comes from outside the state must quarantine for 14 days. These guidelines led UNM’s football team to relocate to Nevada to practice and host games last month.

In Texas, where total cases exceeded 1 million last week, Gov. Greg Abbott has allowed sporting events to go forward with 50% capacity in the stands, though most major university football programs opted to set their capacities at 25% this fall. Student athletes and staff have tested positive for the coronavirus throughout the season, requiring several cancellations. Texas A&M postponed its game last Saturday against the University of Tennessee after a player and staffer tested positive and later postponed this Saturday’s game against Ole Miss. The University of Texas at Austin and the University of Houston also delayed their games this Saturday.

“We’re an open-door community,” Lubbock County Judge Curtis Parrish said about the out-of-state team’s move. “We want people to come in for whatever they need.”

Parrish’s interview with The Texas Tribune came less than an hour after his office announced he tested positive for COVID-19.

The men’s team will reside in Lubbock temporarily, though UNM is still finalizing where the team will practice and play games. Parrish said he has no worries and that he trusts the university to take the necessary health precautions.

At West Texas A&M University, where the UNM women’s team will play, an official said the school is “pleased to host” the Lobos.

“There are no concerns from my perspective. These are private basketball practices being held in a gym with student-athletes who are being tested 3-4 times per week for COVID, have daily symptom checks and basically live in a bubble outside of practice,” said Michael McBroom, the university’s athletic director, in an email. “We will continue to exercise the responsibility and opportunity to serve our students and state as a demonstration of our thoughtful commitment to excellence.”

Both areas also have some of the highest rates of COVID-19 per 1,000 cases in the state.

According to the Santa Fe New Mexican, Eddie Nuñez, UNM’s athletic director, considered a number of locations and chose West Texas because it was close to Albuquerque. The school’s football team already moved out of the state to Nevada so it could play its games and salvage broadcast contracts.

The newspaper also reported that there had been no new COVID-19 cases in either the football or basketball team since last week.

"Fleeing their home state's strict restrictions on sports, New Mexico basketball teams seek refuge in two of Texas' worst hot spots" was first published at https://www.texastribune.org/2020/11/19/new-mexico-basketball-texas-lubbock-coronavirus/ by The Texas Tribune. The Texas Tribune is proud to celebrate 10 years of exceptional journalism for an exceptional state.