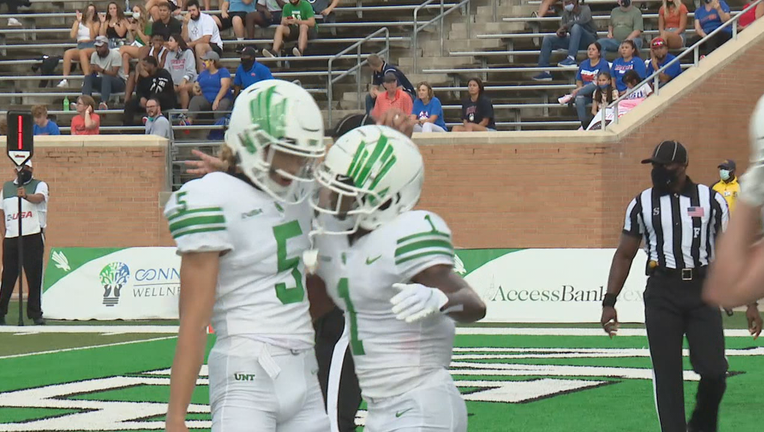 DENTON, Texas (AP) - Jason Bean threw three touchdowns and ran for another one in his first start for North Texas, and the Mean Green set a school record with 721 total yards in a 57-31 win over FCS team Houston Baptist on Saturday night in the season opener for both teams.

Jaelon Darden had three TD catches, scores of 33 and 19 yards from Bean and a 6-yarder thrown by former minor league outfielder Austin Aune in his UNT debut a day before his 27th birthday. Oscar Adaway added TD runs of 35 and 47 yards.

Bailey Zappe was 39-of-62 passing for 480 yards and three touchdowns for Houston Baptist. The senior led all FCS quarterbacks last season with 357 completions, and was second with 317.6 yards passing per game and 35 TDs.

The Huskies, in only their eighth season since starting the program, have only three games scheduled after the Southland Conference decided not to play league games this fall because of the coronavirus pandemic. They face their first-ever Power Five opponent next week at Texas Tech, then go to C-USA team Louisiana Tech on Sept. 26.

Bean, a redshirt sophomore, was the primary backup last season for four-year starter Mason Fine, who graduated as the school's career passing leader. Bean completed 11 of 18 passes for 217 yards, with all the TD passes coming on the first three drives to match his 2019 total when he got into seven games. He also had a 37-yard TD run.