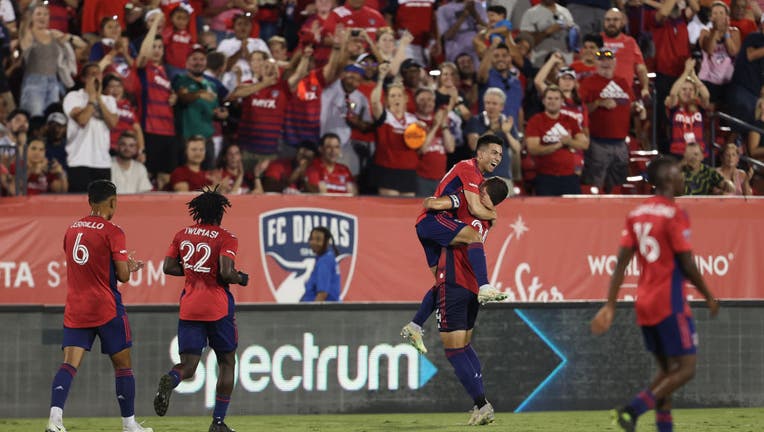 FRISCO, TX - AUGUST 13: Alan Velasco #20 of FC Dallas celebrates with his teammates after scoring his team's fourth goal during the MLS game between San Jose Earthquakes and FC Dallas at Toyota Stadium on August 13, 2022 in Frisco, Texas. (Photo by O

FRISCO, Texas (AP) - Jesús Ferreira scored twice in the first half and FC Dallas breezed to a 4-1 victory over the San Jose Earthquakes on Saturday.

Ferreira took a pass from Alan Velasco just three minutes into the match and scored to give Dallas (10-7-9) the early lead.

Marco Farfan notched his first goal of the season, scoring in the 20th minute, and Ferreira polished off a brace in the 41st with his 14th goal to give Dallas a 3-0 halftime lead.

Velasco found the net in the 57th minute with his fourth goal of the campaign to stretch the lead to 4-0 before Jeremy Ebobisse put San Jose (5-11-9) on the scoreboard with a goal — his 14th — three minutes later.

Maarten Paes finished with one save for Dallas. JT Marcinkowski had two saves for the Earthquakes.