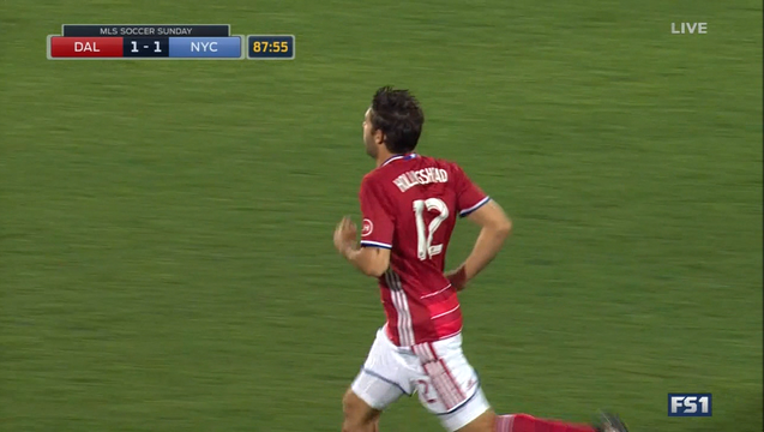 FRISCO, Texas (AP) - Thomas McNamara scored a spectacular goal before crashing into the back of the net and New York City FC tied FC Dallas 1-1 on Sunday night.

David Villa earned a free kick in the 68th minute, sending his shot off the crossbar. With goal keeper Jesse Gonzalez falling to the ground after a leaping attempt to block the shot, the ball deflected straight down and bounced into the air. McNamara raced in at full speed and got his head on the ball as he leaped through the flailing legs of Gonzalez before landing in the back netting of the goal.

That was the only on-target shot for NYCFC (5-3-2) but it wasn't enough to keep Dallas (5-0-4) from remaining the only undefeated team. Nine games without a loss to open the season has Dallas closing in on the league record of 12, held by four teams, the last being Real Salt Lake in 2014. Dallas is unbeaten in 14 straight MLS games.

Kellyn Acosta's third goal in the 20th minute put Dallas on the board. Michael Barrios and Maximiliano Urruti made strong plays to keep the ball alive in the box before Acosta hammered it home.