It was an amazing day at Fair Park as more than 85,000 hockey fans packed the Cotton Bowl in Fair Park. The Dallas Stars played outdoors for the first time.

DALLAS - Thousands of fans packed the Cotton Bowl Stadium in Fair Park for the annual NHL Winter Classic. It’s the first time the game has been played in Dallas and the first time this far south in the country.

Playing on the ice outdoors in Texas doesn’t sound possible. But it happened on New Year’s Day in Dallas. The Dallas Stars rallied for a 4-2 win over the Nashville Predators. 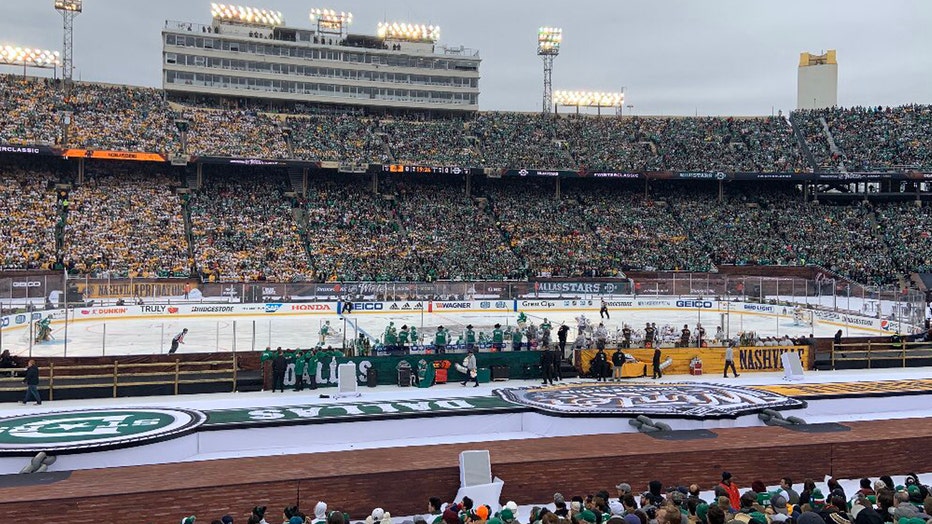 And everything is bigger in Texas. So, of course, the organizers gave the specially prepared regulation ice rink some Texas flair. There was even a giant Texas belt buckle in the shape of a hockey puck along the side of the rink.

The Dallas Police Department’s Mounted Unit stood guard as the players entered the rink. Line dancers stepped to the beat of live country music not far away from a mechanical bull. Troy Aikman and Ricky Williams dropped the first puck. There were even pig races around the rink.

Even before the game fans were able to have some State Fair of Texas fun with activities on the Cotton Bowl Plaza and The Midway. Fletchers Corny Dog stands were set up in three locations.

“Game hasn’t started but I think I’ve already gotten my money’s worth,” said Grant Godel, who was visiting from Nashville.

Fans said the outdoor hockey game at the Cotton Bowl in Dallas was a great way to start 2020.

“It’s a once in a lifetime experience in this city. The hype is definitely worth it. Look at all the fans. They love the weather,” said Ken Stillman, a fan from Dallas.

The NHL commissioner said the game had the second-largest crowd in NHL history with more than 85,000 in attendance.