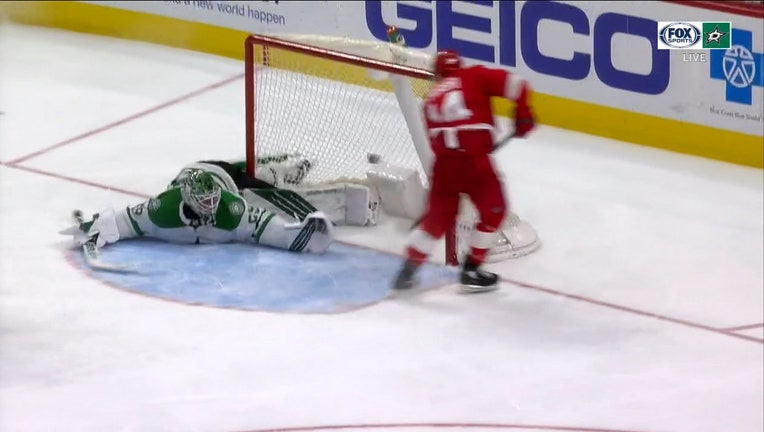 DETROIT - Robby Fabbri scored three goals, one in each period, and the Detroit Red Wings held on to beat the Dallas Stars 3-2 on Thursday night.

"He’s not the biggest or fastest guy, but he makes up for it with competitiveness," Red Wings coach Jeff Blashill said.

The Red Wings did have a setback, losing goaltender Jonathan Bernier to an injury late in the second period after he stopped all 22 shots he faced.

Bernier kept weight off his right skate as he was helped off the ice after Dallas forward Denis Gurianov skated into him, trying to get the puck that caromed off the end boards. Thomas Greiss finished the game in net for the Red Wings and had 16 saves.

For the second time in less than a month, the Central Division’s last-place team has won two straight and three of four games.

"We’re clicking right now and I think that comes from getting a lot of reps together in practice," Red Wings captain Dylan Larkin said. "It has been a lot of fun to see this team gelling together and getting better each and every game."

Detroit will shoot for a season-high third straight victory Saturday night against the slumping Stars.

"This team is playing far better than its record and far better than earlier in the year," Dallas coach Stars coach Rick Bowness said. "They just knocked off Carolina and Tampa Bay."

Greiss gave up a goal to Roope Hintz midway through the second period, 25 seconds after some hats were thrown onto the ice following Fabbri's third goal.

Jake Oettinger made 18 saves for the sixth-place Stars, who have lost nine of their last 12 games and lead Detroit by only one point.

Oettinger was pulled with two-plus minutes left to add an extra skater and Jason Dickinson redirected a shot from the slot with 1:20 remaining. The goaltender went back in net briefly before going back to the bench for a final push that fell short.

"Did we play well enough to win the game? Absolutely," Bowness said.

Detroit's resurgence will take a hit if Bernier is out for an extended period of time, which would also hurt his value on the market for contending teams seeking to trade draft picks for players.

Blashill he would know more about Bernier's status on Friday.

Fabbri was hit in the neck by a puck, but was able to stay in the game.

"It caught me by surprise, but there’s nothing serious, so that’s good," he said.

Bowness bristled at some questions about his reeling team. The defending Western Conference champions are missing

"We put 40 shots on net," he said. "Sometimes you make mistakes and they end up in the back of your net."

Dallas defenseman John Klingberg said the Red Wings look nothing like the team that lost 7-3 and 2-1 to the Stars in January.

"They’re a different team now," Klingberg said. "They’re playing a lot better. They’re tough to play against and they're heavy in their O-zone and our D-zone. They’re a good team."

NOTES: The Stars had twice as many shots as Detroit did through two periods, and still trailed 2-0. ... Detroit assigned veteran forward Frans Nielsen to the taxi squad.