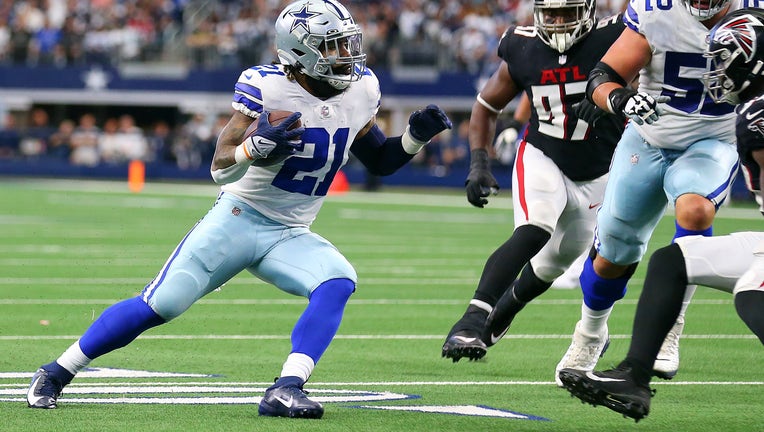 ARLINGTON, TEXAS - NOVEMBER 14: Ezekiel Elliott #21 of the Dallas Cowboys carries the ball against the Atlanta Falcons during the first half at AT&amp;T Stadium on November 14, 2021 in Arlington, Texas. (Photo by Richard Rodriguez/Getty Images)

ARLINGTON, Texas (AP) - Ezekiel Elliott ran for two touchdowns, Nahshon Wright recovered a blocked punt for a score a week after touching one kept Dallas from getting the ball, and the Cowboys routed the Atlanta Falcons 43-3 on Sunday.

Plenty of things that went wrong for the Cowboys in a blowout loss to Denver that ended a six-game winning streak a week ago went right to help the NFC East leaders get back on track.

Offensive execution was among them.

Dallas (7-2) looked much more like the NFL's No. 1 offense with Dak Prescott throwing two TD passes to CeeDee Lamb and Elliott finishing two drives kept alive by fourth-down conversions, all before halftime.

Then came the sequence that led to the highest-scoring quarter in franchise history (29 points in the second) and Dallas' biggest halftime lead (36-3) since 1971.

Dorance Armstrong's one-armed block of Dustin Colquitt's punt was recovered by Wright in the end zone with 37 seconds remaining in the first half. A week earlier again Denver, Wright touched a blocked punt past the line of scrimmage without securing the loose ball, and the Broncos recovered to retain possession.

Atlanta (4-5) had 12 men on the field for the extra point, so the Cowboys went for the 2-point conversion from the 1. Elliott added another plunge across the goal line.

Matt Ryan led the Falcons to the Dallas 20 in just four plays on their first possession before settling for a field goal. Ryan didn't get that deep into Cowboys territory again, threw two interceptions -- including Trevon Diggs' NFL-leading eighth -- and was pulled before the end of the third quarter with Atlanta down 43-3.

Battling an arm contusion that came from an early incompletion, Lamb had all 94 of his yards receiving at halftime, the most before the break for the second-year player. It was Lamb's third two-TD game.

Elliott's first touchdown was a 1-yarder five plays after Prescott's 21-yard pass to Lamb on fourth-and-5. The two-time rushing champ's 2-yard score came the play after Prescott scrambled on fourth-and-3 and found Michael Gallup along the sideline for 23 yards in the first game for Gallup (calf strain) since the opener. 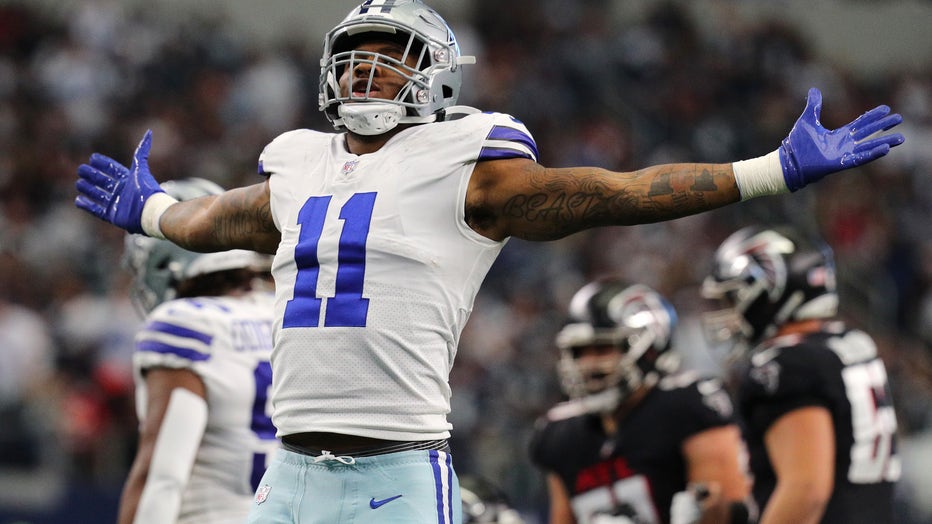 Dallas defensive coordinator Dan Quinn was on the same field with the Falcons for the first time since they fired him as coach after an 0-5 start last season. He took breaks from his pregame workout routine in the stadium to talk to members of the Atlanta staff while also greeting Ryan and owner Arthur Blank.

Atlanta reached the Super Bowl during the 2016 season under Quinn. The Falcons infamously lost to New England 34-28 in overtime after leading 28-3 in the third quarter in Houston. Quinn was in his sixth season with the Falcons when he was fired.

Cowboys kicker Lirim Hajrullahu made his NFL debut at age 31 with Greg Zuerlein on the COVID-19 list. Coach Mike McCarthy was worried about the former CFL kicker getting touchbacks with dangerous return man Cordarrelle Patterson lurking. But Hajrullahu put all six of his kickoffs in the end zone and made all five PATS.