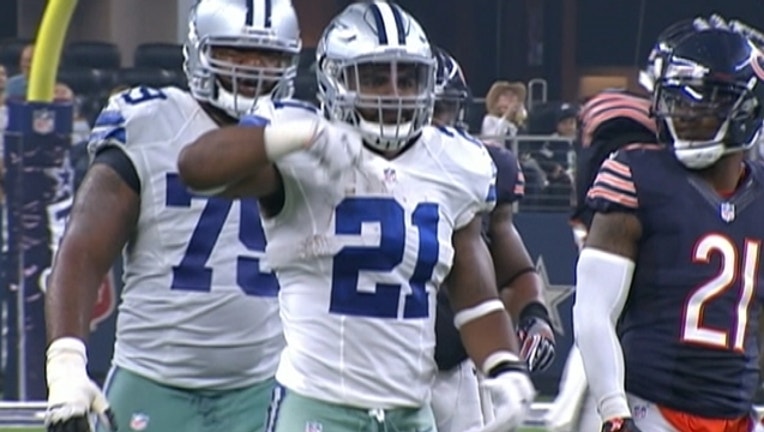 ARLINGTON, Texas (AP) — Dak Prescott led scoring drives on all four Dallas possessions in the first half before throwing his first career touchdown pass, and the Cowboys beat the Chicago Bears 31-17 on Sunday night to snap an eight-game home losing streak.

With his second straight win, Prescott doubled the number of victories the Cowboys (2-1) had in 14 games without injured quarterback Tony Romo over three seasons before the rookie fourth-round pick showed up.

Prescott's first TD pass was a 17-yarder to Dez Bryant for a 31-10 lead in the fourth quarter, and he's up to 99 throws without an interception to start his career. Philadelphia rookie Carson Wentz has 102, and those are the two highest career-opening totals in NFL history.

Brian Hoyer had trouble moving the Chicago offense early with Jay Cutler sidelined by a sprained right thumb as the Bears fell behind 24-3 at halftime and dropped to 0-3 for the second time in two seasons under coach John Fox.

Making his 27th career start for his fourth different team, Hoyer was 30 of 49 for 317 yards — a good portion of that with the game out of each late in the fourth quarter — and threw for two scores to Zach Miller.

Rookie fourth overall pick Ezekiel Elliott had his first 100-yard game for Dallas, finishing with 140 yards on 30 carries and a 14-yard run when he hurdled safety Chris Prosinski.

It didn't even bother Prescott that Pro Bowl left tackle Tyron Smith missed just the second game of his six-year career after his back tightened up during the week.

Prescott was 19 of 24 for 248 yards in Dallas' first home win since last year's opener, which was a week before the first of two broken left collarbones that kept Romo out of 12 games last season. Romo is expected to miss about another month after breaking a bone in his back in the preseason.

Prescott had one of three rushing touchdowns for the Cowboys, who have seven this season after getting eight all of last year, when they finished 4-12.

Because the Bears fell behind again, they couldn't do much with the running game. They had just 15 carries for 73 yards and lost leading rusher Jeremy Langford to an ankle injury in the second half.

It was Chicago's first game without linebackers Danny Trevathan (sprain thumb) and Lamarr Houston (season-ending left ACL year). And the Bears struggled to slow the Cowboys, getting outgained 274-114 in the first half. Dallas had a 19-4 edge in first downs before halftime and finished with 447 yards, including 199 on the ground.

The Cowboys were on their way to a score on a fifth straight possession when Terrance Williams fumbled at the end of a 47-yard catch on the opening drive of the second half. The Bears turned that into the first of Hoyer's two TDs to Miller, a 2-yarder on fourth down to cut it to 24-10.

Chicago S Harold Jones-Quartey left with a concussion in the first half and didn't return. ... The Cowboys lost another lineman when LG La'el Collins missed the second half with a sprained foot. Ron Leary, the starter who lost his job to Collins this season, was his replacement.