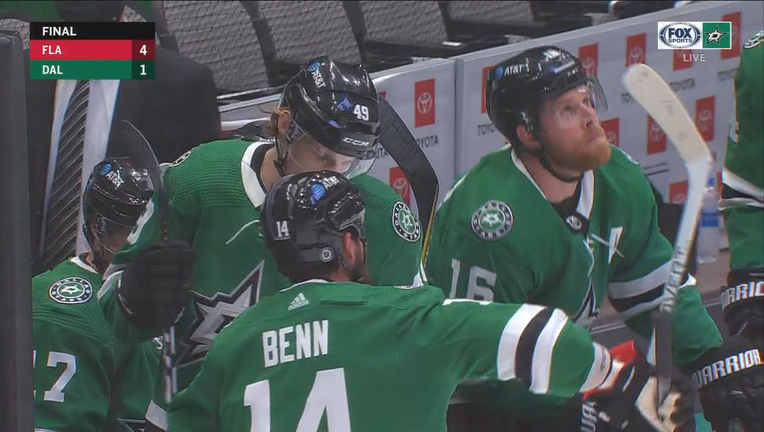 Ekblad was taken off on a stretcher midway through the second period after getting tangled up in the corner with Stars defenseman Esa Lindell following a hit from Lindell. An air cast was placed on his left leg.

Ekblad’s 11 goals this season are tied for the most among NHL defensemen. The two-time All-Star scored the winning goal with 9.3 seconds to play in Florida’s 4-3 overtime win over the Stars on Saturday night after his apparent score with 47.8 seconds was disallowed when a replay review showed he was offside.

The Panthers are two points behind first-place Tampa Bay and one behind second-place Carolina in the Central Division.

Anthony Duclair scored on a penalty shot in the first period and Owen Tippett added an empty netter with 1:05 to play with Huberdeau adding an assist.

Rookie Jason Robertson scored for the Stars, who went 1-2-2 during a five-game homestand and are in danger of failing to qualify for the playoffs after reaching the Stanley Cup Final last season.

In a matchup of backup goaltenders, Florida’s Chris Driedger made 33 saves and improved to 9-4-2. Dallas rookie Jake Oettinger stopped 19 shots and lost at home in regulation for the first time (3-1-5).

Only 31 seconds after Robertson’s redirect on a power play gave the Stars the lead 4:32 into the game, Huberdeau answered with a wrist shot after taking the puck from Jamie Benn along the right boards.

Duclair gave Florida its first lead at 6:26 on a sweeping forehand on the penalty shot after he got ahead of the field and was hooked by Andrew Cogliano.

Huberdeau added a power-play goal with 6:23 left in the first, shooting through traffic for the 3-1 lead for his third multi-goal game of the season.

The Panthers have won four of the first five meetings between the teams this season.