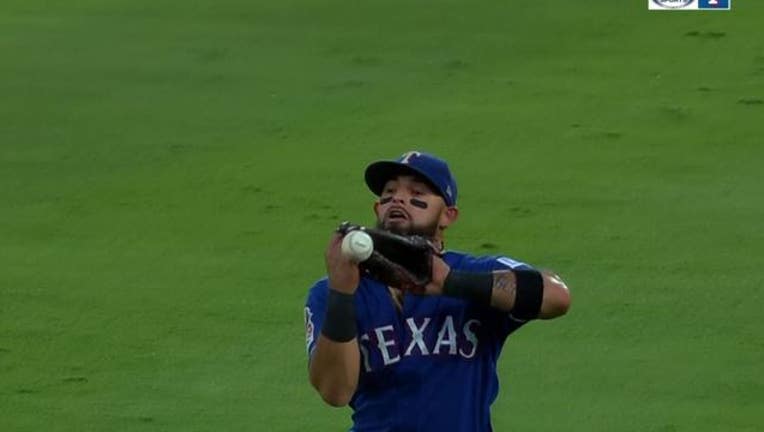 ARLINGTON, Texas (AP) - The Minnesota Twins did what they do better than any other major league team this season - hit home runs - but their 4-3 win over the Texas Rangers on Friday night turned on a fly ball that barely cleared the infield.

Odor and Twins manager Rocco Baldelli both cited the wind inside Globe Life Park for the critical error.

"It was a real high popup. I never caught a popup that moves that much," Odor said. "That's not an excuse."

"Balls would go up in one direction, and you knew they were not coming down anywhere near where they went up," Baldelli said. "If major league ballplayers are having trouble with popups, then trust me, the conditions are probably pretty rough."

Schoop homered in the seventh inning following a one-out single by Marwin Gonzalez. The Twins lead the majors with 238 homers and are on pace to break the big-league record of 267 set last season by the New York Yankees. Minnesota has homered in 16 of its past 18 games since July 28 with a total of 37.

"Schoop had a phenomenal game overall," Baldelli said. "He was awesome. He did it offensively. He did it defensively."

Dyson earned his first win since being acquired from the San Francisco Giants on July 31 with a scoreless seventh inning. Sergio Romo pitched a scoreless ninth, finishing with Danny Santana's ground out with runners on first and second, for his third save in four tries since being acquired from the Miami Marlins on July 27 and 20th in 22 opportunities overall this season.

The Rangers were 1 for 11 with runners in scoring position, leaving a runner at third base in the seventh and eighth innings and at second in the ninth.

Nomar Mazara put the Rangers ahead in the sixth on a two-out, two-run double to the gap in right center.

Jake Odorizzi allowed all three runs on five hits in 5 2/3 innings. He has failed to last six innings in nine of his last 10 starts.

The Rangers' first run scored when Odorizzi uncorked his first wild pitch of the season, skimming a cut fastball off the top of Mitch Garver's glove to score Elvis Andrus.

Each team recalled a right-hander from its Triple-A affiliate before the game. Lewis Thorpe is with the Twins for the third time this season, previously pitching 11 1/3 innings in four games and making one start. The Rangers' Ian Gibaut was acquired from Tampa Bay on July 28 and then pitched in four games for Nashville. Gibaut has made one previous big league appearance, with the Rays on July 12.

Twins DH Nelson Cruz (left wrist strain) hit on the field before the game. Baldelli said Cruz might return soon after becoming eligible to return on Monday without a minor league rehab stint. . . C Willians Astudillo (left oblique strain) went 2 for 4 with a solo homer on Friday night in a rehab assignment for Double-A Pensacola.

Twins right-hander José Berrios (10-6, 3.29) won his last two road starts, going seven innings each time and allowing a total of two earned runs. Rangers right-hander Ariel Jurado (6-8, 5.31) has won one of his last seven starts and allowed a career-high 11 hits last time out, against Toronto. The game will be preceded by 2010 AL MVP Josh Hamilton being inducted into the Rangers' hall of fame.