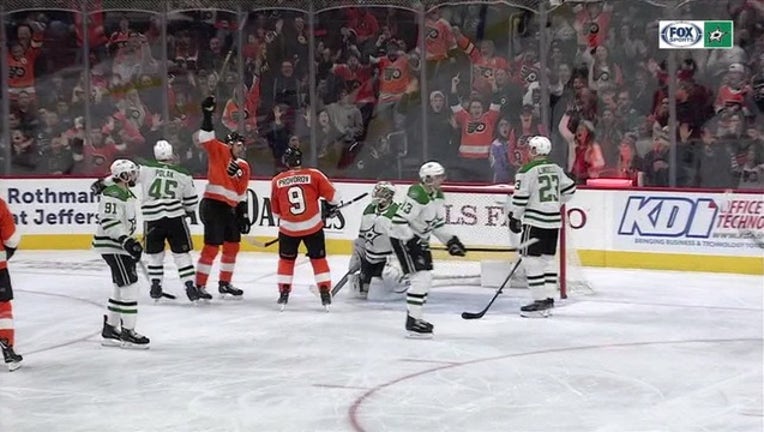 PHILADELPHIA (AP) - Their own version of the "double-doink" helped James van Riemsdyk and the Flyers end a long losing streak.

Van Riemsdyk had a goal and an assist, Carter Hart stopped 37 shots and the Flyers beat the Dallas Stars 2-1 on Thursday night to halt an eight-game skid.

Travis Konecny also scored for the Flyers, who entered with a league-worst 36 points.

Van Riemsdyk made it 2-0 with 11:09 left in the second when his deflection of Claude Giroux's shot went off goalie Anton Khudobin's left skate, then defenseman Esa Lindell's right skate before crossing the goal line. The goal was reminiscent of Bears kicker Cody Parkey's 43-yard last-second field goal miss, dubbed the "double-doink" in Philadelphia, in the Eagles' 16-15 win over Chicago in an NFC wild-card playoff game Sunday.

"It's a funny game," van Riemsdyk said. "Sometimes you don't get those bounces. We certainly got some of those bounces tonight."

Van Riemsdyk, who the Flyers signed to a five-year, $35 million contract this offseason, was bumped up to the first line after playing on the fourth line in Philadelphia's 5-3 loss at Washington on Tuesday. He recorded his seventh goal in his 28th contest after setting a career high with 36 goals last season with the Toronto Maple Leafs.

"It was a great job being at the net," interim coach Scott Gordon said. "(Van Riemsdyk) is a proud player. I know what he's capable of. He has great offensive skills and great presence at the net front."

Jamie Benn scored for Dallas, which lost for the third time in eight games. Tyler Seguin had an assist to extend his point streak to seven games. He has at least one point in every contest since he and Benn were harshly criticized by CEO Jim Lites on Dec. 28.

"Not enough players having an impact with the puck or without the puck," Stars coach Jim Montgomery said. "We didn't have desperation until the third period."

Benn ended Hart's bid for his first career shutout when his wrist shot from the slot with 2:51 left went off the goalie's glove. Other than that, the Flyers rookie was stellar.

The 20-year-old Hart made his eighth start and improved to 3-4-1. He was solid all night and made a pair of key saves in the third period, stopping John Klingberg's shot through a screen with nine minutes remaining and denying Alexander Radulov's wrist shot from the hash marks about a minute later.

Hart is one of the NHL record-tying seven goalies Philadelphia has used this season.

"He's been unbelievable," Konecny said of Hart. "We feel bad for him. He's stood on his head a bunch of times for us. Every time he's been in there, he's given us a good opportunity."

The Flyers improved to 4-7-2 under Gordon and got their fourth win in 17 games.

The Flyers appeared to retake a two-goal lead 1:48 later, but Jakub Voracek's apparent score was waived off after a video review due to goalie interference.

NOTES: The Stars return home Saturday to begin a six-game homestand against St. Louis. Dallas' next road game isn't until Feb. 2 at Nashville. ... Dallas' streak of consecutive games with a power-play goal ended at six. ... The teams will play again in the second and final game of the season series on April 2 in Dallas. ... Seguin has 11 points (six goals, five assists) during his streak.

Philadelphia: At New Jersey on Saturday.