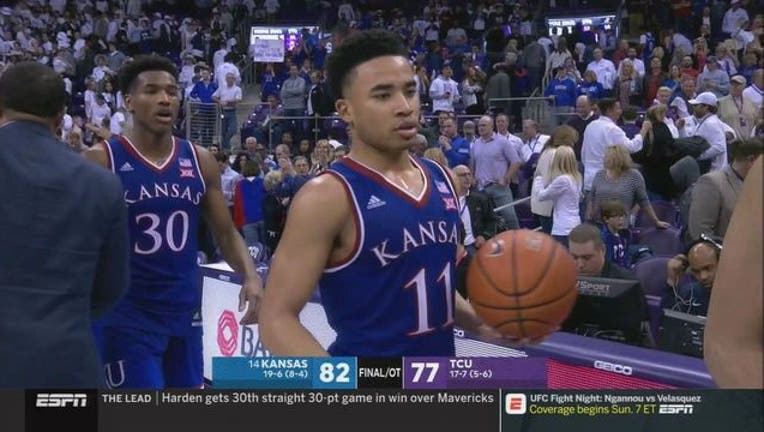 FORT WORTH, Texas (AP) - Devon Dotson scored 25 points, including six free throws in the final 40 seconds of overtime, and No. 14 Kansas beat TCU 82-77 on Monday night for its second win in a row while starting four freshmen.

After blowing a 12-point lead in the second half, the Jayhawks (19-6, 8-4 Big 12) never trailed in overtime. They broke the final tie on K.J. Lawson's jumper with 1:09 left before Dotson sealed it at the free-throw line.

Dotson also had 10 rebounds for one of the three double-doubles for Kansas. Ochai Agbaji had 20 points and 11 rebounds, while Dedric Lawson, a junior and the only non-freshman starter, had 14 points and 10 rebounds.

Dedric Lawson had a putback basket for the Jayhawks with 1:06 left, and they got the ball back after TCU freshman Kendric Davis lost it out of bounds. The ball was initially ruled off a Kansas player until a replay review.

K.J. Lawson tied the game on a floater with 24 seconds left, and Davis missed a potential game-winning shot at the buzzer.

Desmond Bane had 18 points for TCU while Davis scored 16, Kouat Noi had 14 and Alex Robinson scored 13.

Kansas: The young Jayhawks got a big road win. After senior guard Lagerald Vick took a leave of absence from the program last week, coach Bill Self used four freshman starters Saturday for only the second time in his 16 seasons. They won Saturday at Oklahoma State, rebounding from a loss at Kansas State, and overcome a raucous atmosphere in Fort Worth.

TCU: It was a stinging loss for TCU, which had won eight consecutive Big 12 home games. The Frogs were coming off a 92-83 win at then-No. 17 Iowa State on Saturday. They jumped out to a 7-0 lead in the first 1½ minutes against Kansas, and had the big run late before falling.

Kansas is home Saturday against struggling West Virginia, which beat the Jayhawks 65-64 on Jan. 19.

TCU hosts Oklahoma on Saturday with a chance for a regular-season series sweep of the Sooners.