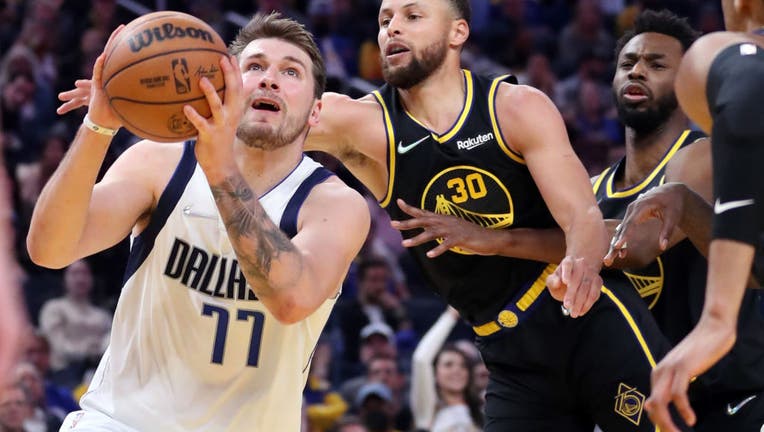 "You almost had a triple-double," Kidd joked, referring to Donic's 34 points, 11 rebounds and nine turnovers.

The miscues didn't matter at the end, when Donic and Dallas did almost everything right.

Doncic converted two free throws with 7.9 seconds left, leading the Mavericks back from 21 down in the third quarter to stun the Golden State Warriors 107-101 on Sunday night.

New addition Spencer Dinwiddie scored 10 of his 24 points in the final period for Dallas.

"We wanted to continue to have fight," Dinwiddie said.

Stephen Curry hit a 3-pointer with 10 seconds remaining and had 27 points and 10 assists in his first game at home since earning All-Star Game MVP honors, but the Warriors couldn't do enough on either end during crunch time as the Mavericks made all the big shots.

Doncic went 10 for 21 from the floor in the first of two matchups over five days between a pair of top-five NBA defenses: No. 1 Golden State and the fifth-ranked Mavericks. Dinwiddie scored five straight points midway through the fourth that got Dallas to 93-90.

Andrew Wiggins added 18 points for Golden State and Kevon Looney grabbed 10 rebounds to go with eight points and five assists as Klay Thompson sat out with an illness after missing practice Saturday. The hope is he will be healthy to travel with the team.

"I think we let our offense dictate our energy and our spirit in the game," Looney said. "... We kind of folded when adversity hit."

Warriors rookie Jonathan Kuminga received a technical with 9:20 left for grabbing the rim after a goaltending call. Golden State couldn’t deliver in what seemed set to be another commanding victory over Dallas after the Warriors snapped a four-game home losing streak to the Mavericks last month with a 130-92 rout.

Golden State has given away big leads in losing its last two home games after a 117-116 defeat to Denver on Feb. 16.

Curry was presented another time with his All-Star Game MVP trophy so the home fans could celebrate the reigning scoring champion's accomplishment: 16 3-pointers and 50 points. Vince Carter, who Curry admired while growing up in Toronto, handed him the hardware during a pregame ceremony.

The teams will meet again Thursday night in Dallas.

"Energy, effort, execution under pressure, that's the name of the game," Kerr said.

Kidd visited his old campus at California in Berkeley on Saturday to see the Golden Bears beat rival Stanford 53-39, then also caught some of Cal's baseball game next-door against Illinois-Chicago and caught up with coach and friend Mike Neu.

"It was good to be back on campus," Kidd said, joking how he has former Stanford star Dwight Powell on his roster.

Mavericks: Also sidelined for the Mavericks were G Trey Burke (sprained left shoulder), F Marquese Chriss (sore right knee) and G Frank Ntilikina (sprained right ankle). ... Dallas is 14-9 on the road against the Western Conference. ... Powell picked up his fourth foul at the 9:02 mark of the third.

Warriors: Jordan Poole was 0 for 7 and missed all four of his 3-point tries. ... C James Wiseman is scheduled to travel with the team on its upcoming four-game road trip and continue to be integrated into practices and scrimmages as he works back from right knee surgery last year. ... Andre Iguodala missed his fifth straight game with lower back tightness.

Warriors: At Minnesota on Tuesday night.