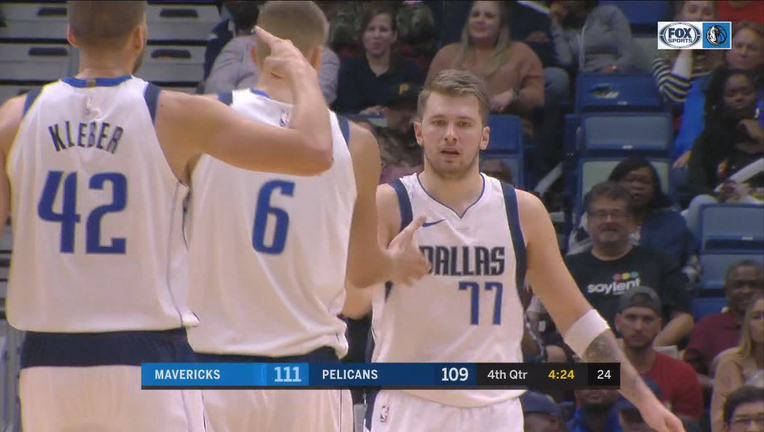 NEW ORLEANS - Luka Doncic highlighted his triple-double by scoring eight of his 25 points in the final five minutes, and the Dallas Mavericks topped New Orleans 123-116 in the Pelicans' home opener Friday night.

Doncic also had 10 rebounds and 10 assists, while Kristaps Porzingis added 24 points and five blocks. Delon Wright scored 18 for Dallas, which has won its first two games this season.

Brandon Ingram led New Orleans with 25 points after scoring 22 in a loss at defending NBA champion Toronto to open the season Tuesday night. Derrick Favors and Josh Hart each had 16 points for the Pelicans, while Lonzo Ball added 15.

Jrue Holiday labored through an uncharacteristically rough shooting night, going just 2 of 11 from the field.

The game was tied at 109 after Ingram's jumper with about five minutes left, but Doncic responded with a jumper while being fouled by Holiday to start a six-point mini-run capped by Jalen Brunson's turnaround near the baseline that made it 115-109 with 3:22 to go.

New Orleans missed five straight 3-pointers before Ingram finally hit one to make it 115-112. Doncic's right-handed runner in the lane over a crowd of defenders, followed by his rainbow 3 off the glass with 1:23 left, made it 120-113, and the Pelicans could not recover.

New Orleans led by 16 early and double digits for much of the first half.

The Pelicans went up 53-40 on Nickeil Alexander-Walker's 3 in the second quarter, but Dallas outscored New Orleans 32-11 during the final eight minutes of the half.

Wright and Doncic each scored eight during that surge, which was ignited by Doncic's step-back 3. Soon after, Porzingis, who had 17 first-half points, added a dunk, a 3 and free throws on successive possessions to make it 55-50.

Mavericks: Brunson finished with 14 points and Maxi Kleber grabbed 10 rebounds. ... Dwight Powell, who plays center and forward, sat out his second straight game with a left hamstring strain. ... Coach Rick Carlisle lost a replay challenge of an officials' decision that Wright committed a blocking foul on Hart's fourth-quarter pull-up that cut the Mavs' lead to 103-101. ... Dallas went 14 of 40 from 3-point range but shot 48.4 percent (45 of 93) overall.

Pelicans: Reserve guard Frank Jackson scored 10 points in just 14:47. ... New Orleans finished 15 of 41 from 3-point range, with Ball missing nine of 12 and Hart missing four of five. ... Coach Alvin Gentry rotated 11 players into the game and 10 of them played at least 14 minutes. In New Orleans' opener at Toronto, 12 players got in the game, each playing at least 13 minutes. ... Top draft pick Zion Williamson, coming off arthroscopic surgery to repair the lateral meniscus in his right knee, was on the court for introductions in street clothes, using a crutch.