A full house of fans saw the Dallas Mavericks win their regular season home opener. They also had to provide proof of vaccination or a negative COVID-19 test to get into the American Airlines Center.

Kristaps Porzingis had another rough shooting night, starting 1 of 9 before finally making his only 3-pointer and leaving a short time later. The oft-injured Porzingis didn't return because of lower back tightness. He came into the game with a black eye.

Eric Gordon scored 22 points, and Christian Wood had 16 points and 17 rebounds for the Rockets, who lost Dallas' home opener for the first time after winning the previous three times.

It was the first time since the end of the 2007-08 season for someone other than Rick Carlisle on the sideline in Dallas for the Mavericks. But it was a familiar face in Kidd, who was drafted No. 2 overall in 1994 before leaving in a trade, coming back in another deal and helping the franchise win its only championship with Dirk Nowitzki leading the way in 2011.

Before the game, Kidd decided with his leadership council that all 15 active players would get in the home opener, and they did. Among them was 7-foot-4 fan favorite Boban Marjanovic, who played for the first time this season and had 11 points. 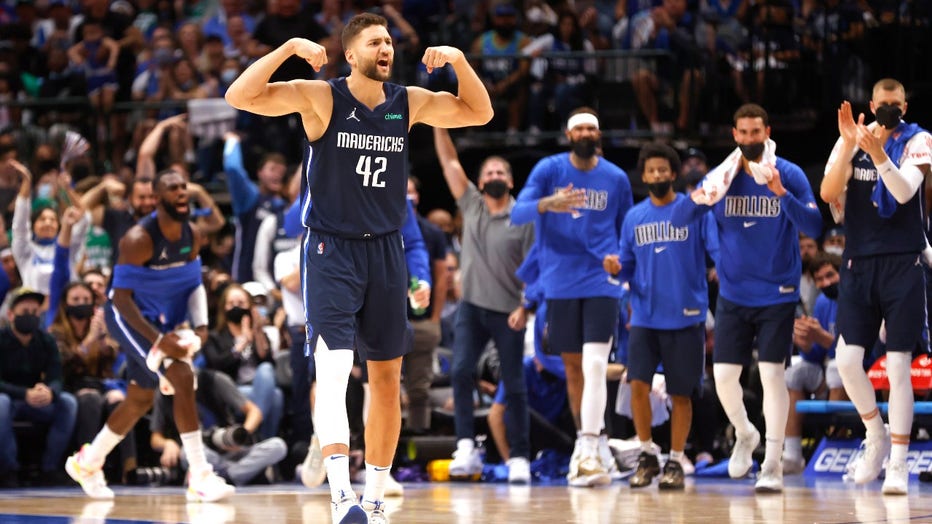 DALLAS, TX - OCTOBER 26: Maxi Kleber #42 of the Dallas Mavericks celebrates a teammate's basket against the Houston Rockets in the second half at American Airlines Center on October 26, 2021 in Dallas, Texas. The Mavericks won 116-106. (Photo by Ron

"Boban was great. He changed the game for us," Kidd said. "I won't be able to do that a lot more, to play all 15. It's a beautiful thing, the chemistry and accountability. Everyone's playing, but we're playing to win, and they did that tonight."

Tim Hardaway Jr. scored 16 points, including the first bucket of the second half to start a 13-0 Dallas run for a 70-60 lead.

After the Porzingis 3 gave the Mavericks their biggest lead to that point at 73-62, the Rockets answered with a 10-0 run before Dallas posted up Doncic to end the run.

The margin was single digits most of the game, although the outcome wasn't much in doubt once the Mavericks went up eight with about four minutes remaining.

"We were right there," Wood said. "I loved the way we competed. We had energy the whole game. We just let that game get away from us in the third."

Doncic did most of his damage inside the arc, the 22-year-old star finishing 10 of 25 despite 1-of-6 shooting from 3. He had seven assists while his backup, Jalen Brunson, tied his career high with 11 assists and scored 11 points.

"I think you guys saw the first three seasons, he was always great," Doncic said. "As you can see, he's improved his passing. I think everybody can see that."

Rockets: Kevin Porter Jr., who had 13 points and eight assists, was called for a technical foul in the fourth quarter after he didn't get a call on the offensive end when he was bumped twice by Brunson and eventually lost a turnover, one of 17 for Houston. Porter fouled Brunson on the other end, and was quickly given the tech. ... Daniel Theis had 15 points and 10 rebounds. ... Rookie No. 2 overall pick Jalen Green scored 10 points and was 2 of 9 from 3 after getting 30 and making 8 of 10 beyond the arc the previous game against Boston.

Mavericks: Kidd said Porzingis was fine and would be evaluated again Wednesday. ... Maxi Kleber hit three consecutive first-half 3s for all nine of his points. ... Among the 15 players, 11 scored while three of the four who didn't score had at least a rebound, assist or steal. ... Dorian Finney-Smith had six points, six rebounds and three blocks on a bad shooting night (0 of 5 from 3).

Mavericks: The other Texas rival, San Antonio, visits Thursday. The Spurs lost the series each of the past two seasons, but won the final game both times to avoid the first Dallas sweep.