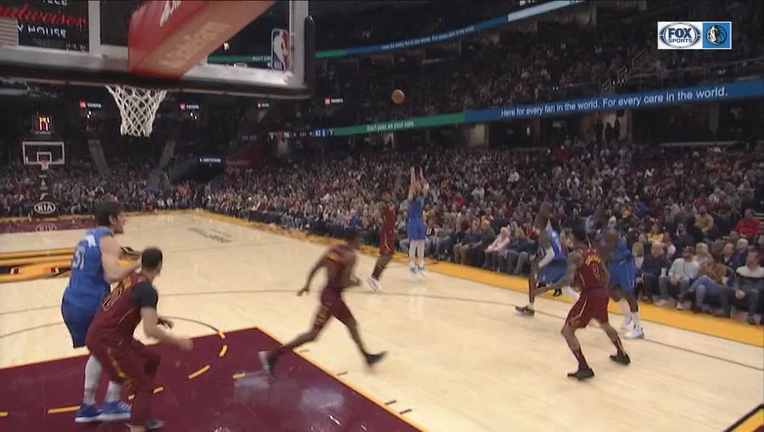 CLEVELAND - Luka Doncic showed off his all-around game -- at the Cleveland Cavaliers' expense.

Doncic had his second straight triple-double and third of the season, finishing with 29 points and 14 rebounds and matching his career high with 15 assists in the Dallas Mavericks' 131-111 victory over Cleveland on Sunday night.

It was the 11th triple-double in 78 career games for the 6-foot-7 Slovenian, extending his NBA record for players below the age of 21. Magic Johnson held the previous mark with seven, which could be obliterated before Doncic's next birthday on Feb. 28, 2020.

"He's a magician with the basketball and at that size, it's hard to stop," Cavaliers forward Kevin Love said. "I can't say enough good things about him. It's unbelievable, even from last year when he was extremely impressive, but this year he's taken it to a whole new level."

Kristaps Porzingis added 18 points, nine rebounds and a season-high six blocked shots and Boban Marjanovic had 12 points and eight boards for the Mavericks. They are 3-0 on the road for the first time since their championship season of 2010-2011.

Doncic completed his triple-double with 3:44 left in the third quarter on an entry pass to Marjanovic. He;'s averaging 26.7 points, 10.3 rebounds and 9.5 assists through six contests.

Doncic sank his first five shots, including three 3-pointers, and delivered a highlight-worthy, behind-the-back pass while driving down the lane to Porzingis for a trey. Dallas outscored Cleveland by 15 points in his 34 minutes, delighting the two full sections of fans of Slovenian decent cheering his every move.

"When the ball is in his hands, we know our job as teammates is to make his job easier," Mavericks guard Tim Hardaway Jr. said. "We know he's going to make the right play. He does a great job attacking and pushing the pace, getting us into situations to be successful."

Love had a season-high 29 points and eight rebounds, Jordan Clarkson scored 17 points and Tristan Thompson had 11 points and 12 rebounds for the Cavaliers, who lost for the first time in three home games under coach John Beilein. Cleveland seized a 23-15 lead as Love scored 13 points in the first seven minutes.

Dallas had seven players reach double figures in points and shot .532 from the field. Jalen Brunson had 14, Seth Curry scored 13, Hardaway had 12 and Dorian Finney-Smith chipped in 10.

"That's on us to improve our defense," Beilein said. "They're really a tough team to match up with and we had no answers for them because of their height at the guard and big man positions."

The 7-foot-4 Marjanovic made a significant impact playing alongside the 7-3 Porzingis in 15 minutes off the bench. The duo combined for 30 points and 17 rebounds, helping Dallas win the glass battle 51-41. "I love being out there with Bobie because he's my boy, he's my friend," Porzingis said. "It's got to be interesting to see two giants out there as fans."

Mavericks: C Maxi Kleber (right knee bruise) was inactive, but Carlisle said his injury was "not serious" and expects the third-year pro to return to practice Tuesday. ... Curry played in one game with Cleveland as a rookie on March 22, 2014. ... Assistant coach Jenny Boucek was a member of the Cleveland Rockers of the WNBA.

Cavaliers: G Matthew Dellavedova (personal reasons) was unavailable for the second straight game. G Brandon Knight, who did not appear in the first four contests, had 10 points while filling in for him as the backup point guard. .... Love had a streak of five straight double-doubles to open the season snapped.