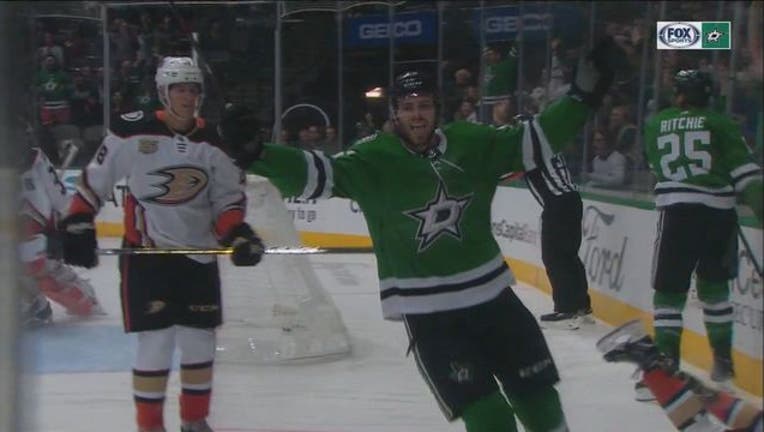 DALLAS (AP) - Jason Dickinson had two goals and an assist in his first multipoint game, and the Dallas Stars beat the Anaheim Ducks 5-2 on Thursday night.

All seven goals came from players who hadn't scored yet this season.

Roman Polak, rookie Miro Heiskanen and Mattias Janmark scored for Dallas, and Ben Bishop made 23 saves. The Stars have won two straight and are 5-2 at home.

Ryan Getzlaf had two goals for Anaheim, which lost its fourth straight. John Gibson stopped 36 shots for the Ducks.

Dickinson got his fourth goal in 45 career games on a 2-on-1 rush five minutes into the game. Getzlaf tied it with a wrist shot before Polak put Dallas ahead midway through the period.

Getzlaf tied it again at 3:09 of the second. After the shot went in, a skirmish broke out, resulting in one major and one minor penalty for each team. In the period, Dallas totaled 15 penalty minutes and Anaheim had 13.

The Stars broke the tie with second-period goals by Heiskanen, Janmark and Dickinson for a 5-2 lead.

NOTES: The Stars scored five goals in each of two wins against Anaheim this season. ... The Ducks played in Dallas for the second time in 13 nights. The season series will end with a game in Anaheim on Dec. 12. ... Dallas RW Brett Ritchie, 25, and his younger brother Nick, 22, played against each other for the seventh time in their NHL careers. Each had an assist, his first point while playing against each other. ... Stars RW Alexander Radulov (lower-body injury), who usually skates on the line with Tyler Seguin and Jamie Benn, missed his third straight game.

Stars: Begin a six-game trip, their longest of the season, Sunday at Detroit.