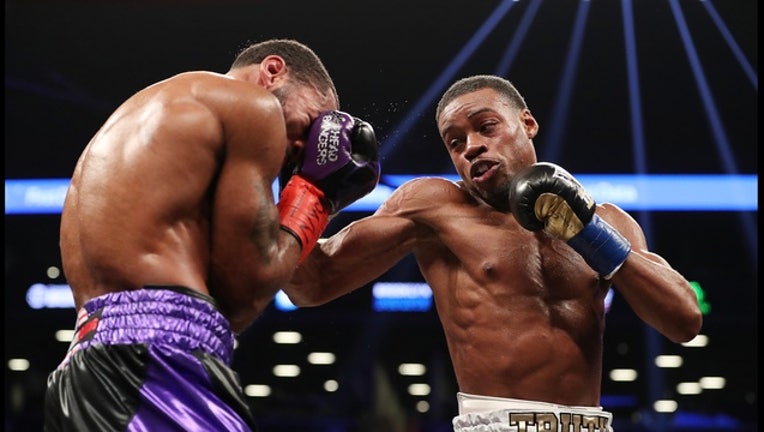 NEW YORK (AP) - Errol Spence Jr. easily defended his welterweight title for the first time Saturday night, beating Lamont Peterson when the fight was stopped just after the bell sounded to begin the eighth round.

Spence had dominated the fight and both of Peterson's eyes appeared swollen as doctors checked him after the seventh round. The bell rang to start the eighth, and Peterson moved toward the center of the ring before his corner told the referee to call it, the end coming a second into the round.

"I didn't know I would dominate like that," Spence said. "I expected to get the knockout, but this was a great performance."

Spence (23-0, 20 KOs) dominated in his first attempt defending the IBF 147-pound crown he won last May when he went to Sheffield, England, and stopped Kell Brook in his hometown, breaking the champion's orbital bone and knocking him down in the 10th round before Brook went to a knee in the 11th and the fight was stopped.

He knocked Peterson (35-4-1) down in the fifth and hurt him in many other rounds, ripping punches into his ribs to set up hard shots to the head.

Spence outlanded Peterson by a massive amount and had won every round on all three scorecards in a performance that easily backed up the accolades he earned in his title-winning victory.

Spence confidently threw his jab to get warmed up in the first, and then hurt Peterson with a body shot along the ropes in the second. They traded hard shots in the third with Spence continuing to go to the body and Peterson getting him upstairs.

The 2012 U.S. Olympian knocked Peterson down in the fifth when a right hand set up a solid shot to the head. Peterson fought back gamely later in the round, easily the best one of the fight, but his right eye was closing by the sixth, making it even harder to stop the punches that had been pummeling him.

"He was getting the shots on me early. He was the better man tonight," Peterson said.

"I know Lamont, he's a tough fighter. He's willing to die in there," Spence said. "You saw his coach had to stop the fight because he wanted to keep fighting."

Peterson, a 33-year-old former champion at 140 and 147 pounds, hoped a victory could get him into the mix for a couple more big fights to help further a boxing Hall of Fame case that he acknowledged this week isn't strong enough.

But he was in against a fighter who's already regarded as one of boxing's best and eager to keep proving it. Spence again called for a match against Keith Thurman, who holds two welterweight titles.

"Since I was 15-0 I've been calling this guy out and he keeps making excuses," Spence said. "Let's get it on."