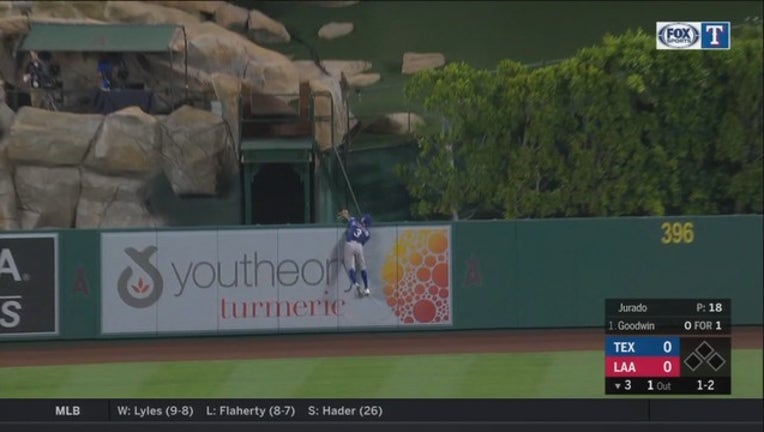 And when they didn't, Delino DeShields was there to help out.

Jurado pitched six innings of two-hit ball to earn his second victory since June, and DeShields reached over the center field fence to make a spectacular homer-stealing catch in the Rangers' 3-0 victory over Los Angeles on Wednesday night.

DeShields kept the game scoreless in the third when he reached up and over to take a homer away from Brian Goodwin . The outfielder's timing and reach were both impeccable, and they allowed him to rob a friend.

"He hit it and I just timed it up," DeShields said. "It's something I take pride in, my defense. We've got a (pitcher) out there that struggled his last outing. You just want to give your best effort for your teammates. Off the bat, I didn't really think it was going to keep going. I'm glad I took a peek at the wall to see where it was."

DeShields wasn't completely certain he caught it until he looked in his glove, remembering an incident earlier this season in which he dislodged the ball out of his own mitt while making the play. He playfully bit down on the baseball before throwing it back to the infield, and he pointed at Goodwin.

"I guess he knew I made a good catch," DeShields said. "I guess he wasn't that hurt about it. I kind of felt bad, but it's part of the game. Who knows, he might get me one day."

Nick Solak had an RBI single in the sixth and Isiah Kiner-Falefa added a two-run double in the eighth as the Rangers won the season series 10-9 over their fellow AL West also-rans. Texas took four of six from the Angels in two series over the past 10 days.

"I feel like every game we've played with them has been like tonight, where one hit or one pitch decides the game," Texas manager Chris Woodward said.

Trout got the day off after hitting his major league leading 43rd homer Tuesday night, and it probably thrilled the Rangers. Trout has hit 11 homers against Texas this season, tied for the most by an opponent in franchise history, while his 1.365 OPS is the third-highest by any Texas opponent in a season.

Trout has been dealing with minor pain in the bottom of his right foot for several weeks, he said. Angels manager Brad Ausmus decided to give him two consecutive days of rest since they don't play Thursday.

"Just been sore, but I'll be good to go on Friday," Trout said.

Without Trout, the Angels were shut out for the seventh time this season during their sixth loss in seven games.

After opener Emmanuel Clase barely escaped a bases-loaded jam in the first inning, Jurado (7-10) retired 16 of his first 18 batters, giving up only two hits to Kole Calhoun. The performance was an impressive turnaround for Jurado, who had lost four consecutive starts and seven of his last nine, including three straight defeats over which he yielded 22 runs in 13 2/3 innings.

"Tonight I didn't leave any pitches in the middle," Jurado said. "When I was missing something, it was off to the side."

José Leclerc pitched the ninth for his ninth save, his first since Aug. 11.

Angels rookie Patrick Sandoval pitched five innings of one-hit ball in his fourth career start, racking up nine strikeouts in the best effort of his young career. The native of nearby Mission Viejo, California, struggled only with his control in his second start in his home ballpark, issuing three walks.

"We thought he had done his job," Ausmus said. "We were supposed to get some runs by the bottom of the fifth and get his first win, but it wasn't meant to be."

The Rangers promptly broke through against LA's bullpen. Elvis Andrus drew a walk from former Rangers farmhand Miguel Del Pozo (1-1) and eventually scored on Solak's single off Keynan Middleton, who was back on a major league mound for the first time since undergoing Tommy John surgery in May 2018.

Kiner-Falefa quickly added two more runs with his first hit since his latest recall from the minors.

Rangers: Lance Lynn (14-9, 3.85 ERA) takes the mound in Arlington on Thursday for the opener of a four-game weekend series against the Seattle Mariners and Félix Hernández (1-4, 6.09 ERA).