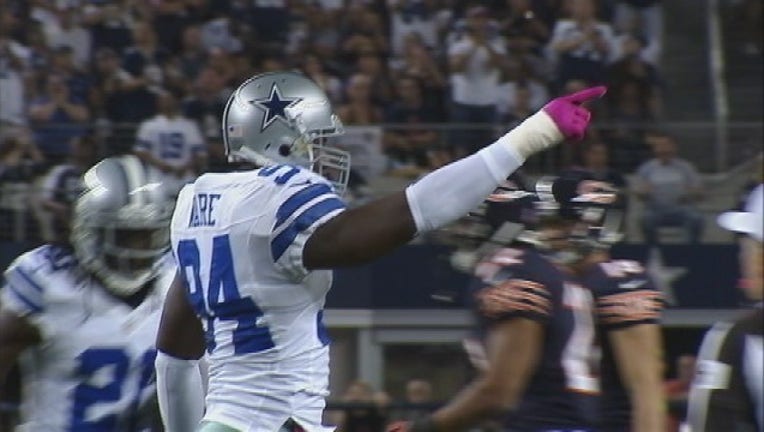 ENGLEWOOD, Colo. (AP) - DeMarcus Ware won't be returning to either the Dallas Cowboys or the Denver Broncos as expected.

The 12-year NFL veteran is instead retiring from the NFL.

Next to a split image of the Cowboys and Broncos, Ware wrote, "After a lot of thought and prayer, I've decided to accept the unknown and retire from my NFL career. Tempting opportunities still present themselves for me to play and I feel better than I have in years. However, long-term health of quality of life outweigh the spark and passion to play that I once had."

Ware's decision is a shocker.

Just two months ago, he scoffed at those suggesting he might have played his last NFL game after he missed the Broncos' season finale to undergo lower back surgery.

Hours before Ware announced his retirement, Broncos general manager John Elway said, "He's going to test the market to see what's out there. I told him that's probably the best thing to do at this point in time and we'll stay in touch and see where he is."

After he announced his retirement, the Broncos tweeted, "See you in Canton."

"DeMarcus, you are the epitome of what an NFL player should be," Elway tweeted. "Congrats on your Hall of Fame career & thank you for becoming a Bronco!"

Cowboys owner Jerry Jones said: "DeMarcus was everything we could have ever wanted in a player, a person and a representative of the Cowboys organization. He was one of the most dominant NFL players at his position in his era, and he was one of the most dynamic players in the history of the Dallas Cowboys.

"We wish nothing but the best for DeMarcus and his family, and we appreciate and respect his contributions to the NFL and to our team."

In his Twitter post, Ware thanked "all the people in my life who had a hand in molding me into a great player and the God fearing man I am today. I thank the Dallas Cowboys and Denver Broncos for opportunities to experience what greatness feels like."

Ware retires with 138½ sacks, eighth on the career list.

The Cowboys' all-time sacks leader with 117, Ware joined the Broncos as part of Elway's defensive makeover in 2014 along with safety T.J. Ward and cornerback Aqib Talib.

"You always want to be a leader. You think you know what it takes and you think you have great ideas, but until you're like three feet away from it and you see like nah, he really doesn't do that or he does this instead of that. And it can just be the little subtle stuff like he comes in and watches film on his phone, it's the little stuff that you observe, that you take," Miller said.

"Like, I don't have to come in every day and make an announcement. I can just come in and do my work and say what needs to be said and get things done. I think I just had to calm down and what calmed me down was really just seeing how it was really supposed to be," Miller said. "I was full speed before, 100 percent. DeMarcus, he's like that, too, though. But just not all the time, you get to see there's a time and a place for everything, and in DeMarcus I got to see a great example of that."

Ware totaled 81 tackles and 21½ sacks in Denver and had a terrific playoff performance two seasons ago with a dozen quarterback hits during the Broncos' run to their Super Bowl 50 title.

Injuries took their toll , however. He missed five games in 2015 with a back injury that first flared up in Dallas, and six games last season with a broken forearm and more back troubles.

Ware received an outpouring of support from players and coaches alike after announcing his retirement.