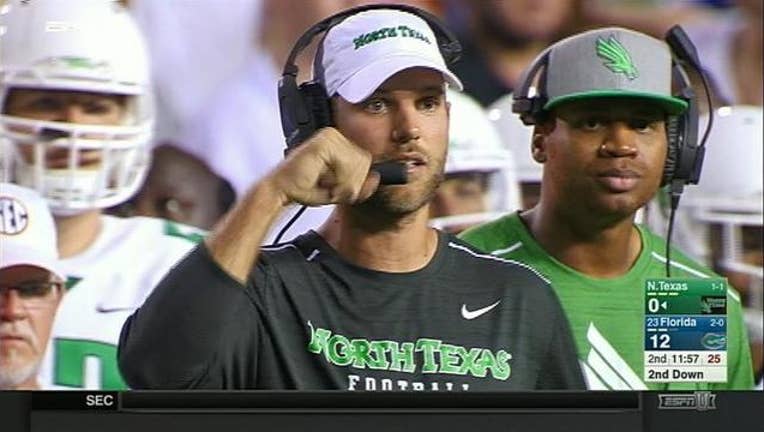 GAINESVILLE, Fla. (AP) — Florida quarterback Luke Del Rio injured his left knee in a 32-0 victory against North Texas on Saturday night, a huge concern as the Gators prepare to play at No. 15 Tennessee next week.

The injury overshadowed a dominant performance by Florida's defense, which allowed a school-record 53 yards on 50 plays. The previous mark was 59 yards allowed against Western Carolina in 2006.

Defensive lineman Joshua Wheeler hit Del Rio low at the end of incomplete pass late in the third quarter, drawing a personal-foul penalty. Trainers and coach Jim McElwain rushed to the field as Del Rio ripped off his helmet. Del Rio eventually got up and walked to the locker room without any assistance.

But that was hardly the end of it for Florida (3-0). McElwain, who seemingly believed Wheeler's hit was dirty, started yelling at the North Texas (1-2) sideline and had to be restrained by officials and then players. Both teams responded by stepping onto the field and moving toward the hash marks.

On the next play, Florida guard Martez Ivey was ejected for grabbing linebacker Fred Scott by the facemask during a run. Ivey will not be suspended for the first half of next week's game against the Volunteers.

There was no immediate word on Del Rio's injury. He completed 14 of 25 passes for 186 yards, with an interception.

NORTH TEXAS: Coach Seth Littrell, a former offensive assistant at Arizona, Indiana and North Carolina, is trying to change the culture at North Texas. Playing the Gators tough early — the score was 19-0 through three quarters — was a good start and surely something to build on in Littrell's first season.

FLORIDA: The tune-up games are over. While handling UMass, Kentucky and North Texas, Florida's defense was dominant and its offense remains a work in progress. It remains to be seen how the Gators' young and inexperienced offensive line will fare against the meat of the schedule.

Florida should remain at or near No. 23 , making next week's game at Tennessee the second in eight years in which both Southeastern Conference rivals were ranked. They also were both ranked in 2012. The Gators, who have won 11 in a row in the series, and Volunteers were both unranked the previous two meetings.

NORTH TEXAS: Opens Conference USA play at Rice (0-3). The Mean Green are 2-4 all-time against the Owls.

FLORIDA: Plays the Volunteers (3-0) for the 27th consecutive year. Florida is 20-6 during that stretch, including 11 straight wins that mark the longest streak since the programs first played in 1916.