Fans helped welcome the TCU Horned Frogs back to Fort Worth after their historic win in the Fiesta Bowl. The team was the first Big 12 team to win a College Football Playoff game and will be the first to play for a national championship since Texas back in 2009.

After the best semifinal day in the nine-year history of the College Football Playoff, the title game will match the defending national champion against the closest thing the sport has had in years to a Cinderella team.

It will be No. 1 Georgia (14-0) looking for its second straight championship against upstart and No. 3 TCU on Jan. 9 at SoFi Stadium in Inglewood, California.

The four-team playoff has been littered with lopsided semifinal games, but Saturday — and into early Sunday and the new year — delivered two thrillers and a combined 179 points.

The Bulldogs came from 14 points down in the second half to beat No. 4 Ohio State 42-41 in the Peach Bowl and advance to the CFP championship game for the third time under coach Kirby Smart.

"If we want any chance of winning a national championship, we have to play a lot better football than we played tonight, but we have to keep the resiliency and composure along with us," Smart said.

The Bulldogs and Buckeyes played a classic that came down to a missed field goal by Ohio State with three seconds left. Amazingly, it was even better than the wild opener of the semifinal doubleheader between No. 3 TCU and No. 2 Michigan.

The Horned Frogs (13-1) upset the Wolverines 51-45 in the Fiesta Bowl, the second-highest scoring CFP game ever. 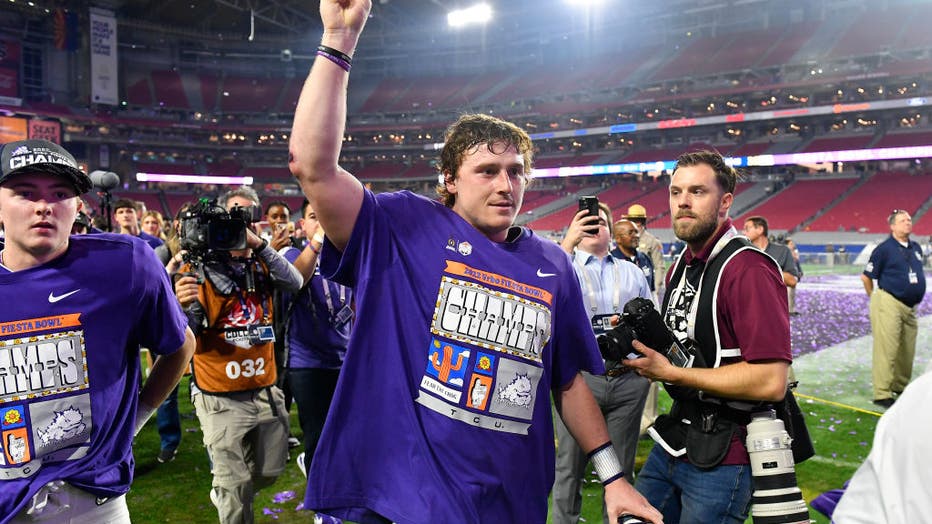 "We’re going to celebrate it," TCU quarterback Max Duggan said. "Obviously, we’re excited, but we know we got a big one coming up."

TCU, the first Big 12 to win a playoff game, will be looking for its first national title since 1938. Under coach Dutch Meyer, the Horned Frogs beat Carnegie Tech 15-7 in the Sugar Bowl to complete a 10-0 season.

The Southeastern Conference champion Bulldogs opened as a 13 1/2-point favorites, according to FanDuel Sportsbook, in what will be the fifth meeting between the schools.

Georgia has won them all, including the last in the 2016 Liberty Bowl.

Coming off a 5-7 season in 2021 and picked to finish seventh in their conference before the season, the Horned Frogs have embraced the underdog role and thrived on being doubted.

"We know we’re going to hear it again. It’s not going to stop now," first-year coach Sonny Dykes said. "We got to do what we did this game (against Michigan). We’ve got to answer that criticism and show up and do what we’re supposed to do.

"If we think that’s going away, I think you guys all know that’s not. That’s just the way it is."

TCU would be the first team to win a national championship the year after having a losing season since Michigan State in 1965.

Georgia, No. 1 for most of the season, is looking for its third national title, trying to become the first back-to-back champion in the CFP era and the first since Alabama won the BCS in 2011 and '12.

It will be a matchup of Heisman Trophy finalist quarterbacks, with Duggan and Georgia's Stetson Bennett.

Neither is a future NFL draft first-rounder, and both had ups and down in the semifinal but came through in the biggest spots.

Duggan ran for two scores and threw two TD passes as the Frogs held back a surging Michigan in the second half.

Bennett threw for 398 yards and two touchdowns in the fourth quarter, including the game winner with 54 seconds left.

These Bulldogs rely more on Bennett and their offense than last year's championship team, which fielded one of the best defenses college football has had in recent history. Georgia ranked fifth in the nation in yards per play (6.97) coming into the playoff.

The Frogs have have a powerful offense, too, with Duggan and star receiver Quentin Johnston, who had 163 yards on six catches against the Wolverines.

This is the penultimate season of the four-team version of the playoff before it expands to 12 teams in the 2024 season.

Before Saturday, only three of 16 semifinals had been decided by single digits, and all those blowouts helped fuel a desire to grow the field in the hope of creating some more interesting postseason games.

This New Year's Eve, the four-team playoff turned out to be an eight-hour college football party.

After losing to TCU, Michigan coach Jim Harbaugh summed up his team's game, and as it turns out, the day.