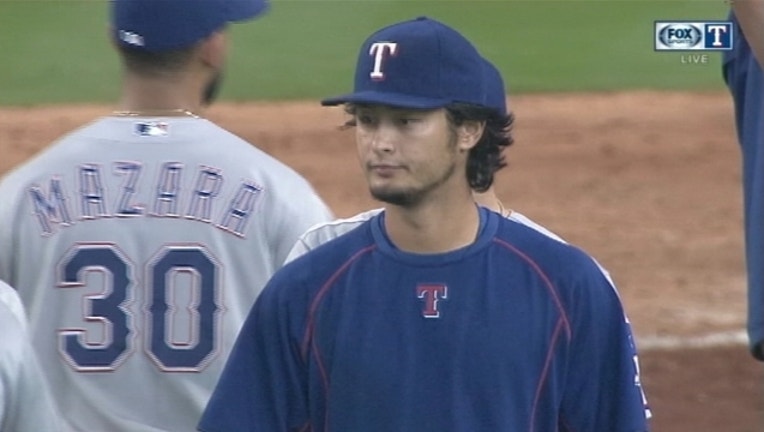 ARLINGLTON, Texas (AP) — Yu Darvish looked playoff-ready with a season-high 12 strikeouts in six innings as the Texas Rangers beat the Tampa Bay Rays 3-1 on Friday night and clinched home-field advantage throughout the postseason.

The Rangers can be tied by only the Cleveland Indians and they own the tie-breaker by winning the teams' season series. The AL owns home-field advantage in the World Series thanks to its win in the All-Star Game.

Darvish (7-5) allowed one run, three hits and one walk. His 28th career game of double-digit strikeouts is the second-most in a pitcher's first 100 major league starts, topped only by Dwight Gooden (31). Darvish will likely start Game 2 of the Division Series following Cole Hamels.

Shin-Soo Choo returned to Texas' lineup after missing 39 games with a fractured left forearm. Choo pulled a single to right in his first plate appearance since Aug. 15 and went 1 for 4.

Darvish went into the game averaging 11.45 strikeouts per nine innings this season, best in the league. In his final four starts of the season, he fanned 38 in 24 2/3 innings.

Beltran homered just inside the right-field foul pole, his 29th of the season and seventh since joining Texas at the non-waiver trade deadline.

Odor's homer was his 33rd, tying Adrian Beltre for the team lead this season. The only Texas second baseman to hit more in a season is Alfonso Soriano, with 35 in 2005.

Sam Dyson earned his 38th save. Four Texas relievers worked three scoreless innings, running the bullpen's streak to a club-record 29 2/3, and it allowed one hit and one walk.

Evan Longoria had two doubles, one driving in the Rays' run, giving him career highs of 171 hits and 80 extra-base hits this season.

Texas' 53rd home win set a club record. . The Rays are 10-18 in September, the most losses in one month for the team since going 7-20 in July 2007. . Logan Forsythe, who has been the Rays' leadoff hitter in 123 games this season, appeared as a pinch-hitter and will return to the lineup on Saturday night. . Ian Desmond increased his majors-leading total of outfield errors to 12 with two dropped fly balls.

Texas: Colby Lewis (6-4), who figures to start Game 3 of the Division Series, is 0-3 with a 9.75 ERA in three September starts after missing two months with a strained lat muscle. Lewis lasted only 1 1/3 innings in his previous start last Sunday at Oakland.