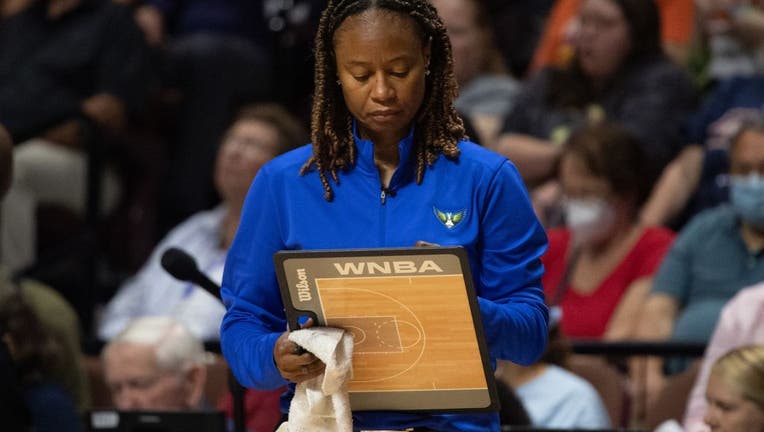 UNCASVILLE, CT - AUGUST 21: Dallas Wings head coach Vickie Johnson writes on her clipboard prior to Game 2 of the First Round of the WNBA Playoffs between the Dallas Wings and the Connecticut Sun on August 21, 2022, at Mohegan Sun Arena in Uncasville

ARLINGTON, Texas - The Dallas Wings aren't picking up the team option on coach Vickie Johnson's contract, cutting ties after two seasons with the first coach to win a playoff game since the franchise moved to Texas.

Wings president and CEO Greg Bibb said Monday the decision was "the best opportunity to achieve our long-term goals of advancing in the playoffs and ultimately competing for a WNBA championship."

Johnson was 32-36 in two seasons with a 1-3 playoff record. The postseason victory, in Game 2 of a first-round series against Connecticut, was the first for the franchise since 2009. The Sun reached the WNBA Finals, losing to Las Vegas in four games.

The Wings made the playoffs in Johnson's first season as well but were blown out by Chicago in a first-round game. The league expanded the opening round to a best-of-three format this season.

The 50-year-old Johnson was a two-time All-Star in the WNBA before becoming a coach. She spent seven years as an assistant with the San Antonio Silver Spurs before one season as coach.

When the San Antonio franchise moved to Las Vegas, Johnson stayed with the club as an assistant on Bill Laimbeer's staff.

The Wings franchise just completed its 25th season, the last seven in the Dallas area. The first 12 years were in Detroit, followed by six in Tulsa, Oklahoma.