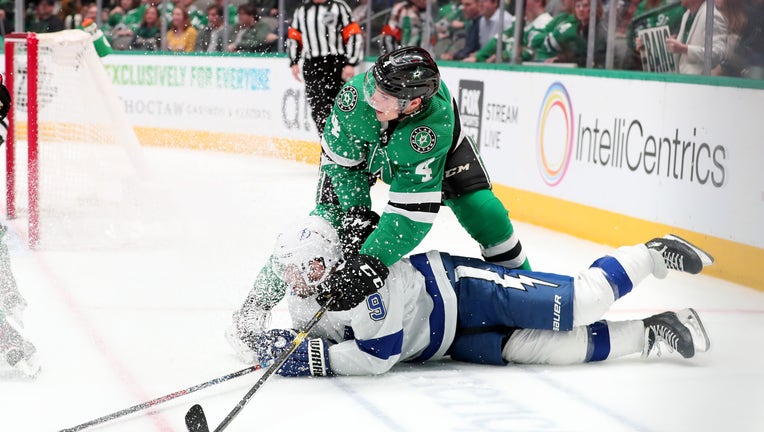 Tyler Johnson #9 of the Tampa Bay Lightning collides with Miro Heiskanen #4 of the Dallas Stars in the second period at American Airlines Center on January 27, 2020 in Dallas, Texas. (Photo by Tom Pennington/Getty Images)

On Saturday night, two of the league's southernmost teams begin a Stanley Cup Final like none other in the great white north when the Dallas Stars and Tampa Bay Lightning face off in Game 1. The Texas and Florida heat that would have been around in late May and June has been replaced by a chill in the air with teams from nontraditional markets vying for hockey's biggest prize in the northernmost city in the NHL.

"We don't know what the temperature is outside because we're never outside, so it doesn't come into play," Stars general manager Jim Nill said from the confines of the bubble. "We're 75, 80 degrees here all the time, so it's perfect -- perfect environment."

The Stars and Lightning would take any environment for a chance to win the Cup. Dallas players, coaches and staff have been here since July 27, and Tampa Bay joined them Sept. 5 after spending six weeks in Toronto and flying cross-country.

Dallas has been waiting since finishing off the Vegas Golden Knights in Game 5 of the Western Conference final Monday. Tampa Bay won the East on Thursday night by beating the New York Islanders in Game 6 of that series on Anthony Cirelli's overtime winner.

It's a quick turnaround for the Lightning, who don't mind that for this opportunity.

The Stars coaching staff pre-scouted each potential opponent, with Rick Bowness and assistant John Stevens diving into the Lightning the past few days.

"We'll be well-prepared," Bowness said. "There'll be no surprises."

This year is full of surprises. After the Lightning skated off with the Prince of Wales Trophy for winning the East, Blake Coleman was asked about his journey from being traded in February with his pregnant wife two weeks from giving birth through to the bubble and said, "It's been kind of crazy, but whose 2020 hasn't been crazy?"

The NHL is one round from capping its crazy season and crowning a champion. Some things to watch in the Dallas-Tampa Bay Stanley Cup Final:

It's the first time in NHL history that the final features two Russian starting goaltenders. The Lightning's Andrei Vasilevskiy played in the final as a rookie in 2015, while the Stars' Anton Khudobin hadn't started a playoff game until this year.

Nikolai Khabibulin is the only Russian goalie to win the Stanley Cup when he did so with Tampa Bay in 2004.

"I want both guys to win, but it's impossible," Khabibulin said. "I know both guys, so I wish them both well and play the best that they can play and show what they can."

If the Lightning win it all, Vasilevskiy, defenseman Victor Hedman and forwards Brayden Point and Nikita Kucherov all have strong cases to earn playoff MVP honors. For the Stars, it could be Khudobin or captain Jamie Benn, and their leading scorer is actually defenseman Miro Heiskanen.

The 21-year-old Finn is playing beyond his years and skating circles around defenders.

"When I was young kid, I was skating outdoors, so that's where it's coming from," Heiskanen said. "I try to use it as much as I can and try to skate a lot with the puck and without it, so it helps in my offensive game and defensive game."

One thing that gave this unusual postseason the potential to produce some high-quality hockey is the time off to heal injuries unlike the usual grind after an 82-game regular season. The Stars go into the final almost totally healthy, though the Lightning are dealing with some potentially significant injuries to Point and Cirelli.

Cooper said Cirelli returned to Game 6 of the East final Thursday and played "basically on one leg." Point didn't look right after missing Games 3 and 5 with injury and was using a massaging device on the bench between shifts.

Stars winger Radek Faksa is among those considered "unfit to play" for Dallas. Bowness wouldn't say if a few extra days off would allow Faksa -- who could be seen with his left wrist wrapped -- to return to the lineup in the final.

Stars defenseman Stephen Johns hasn't played since Aug. 11. Usual starting goalie Ben Bishop is skating again, though even if he's healthy, the net probably belongs to Khudobin given the way the 34-year-old is playing.