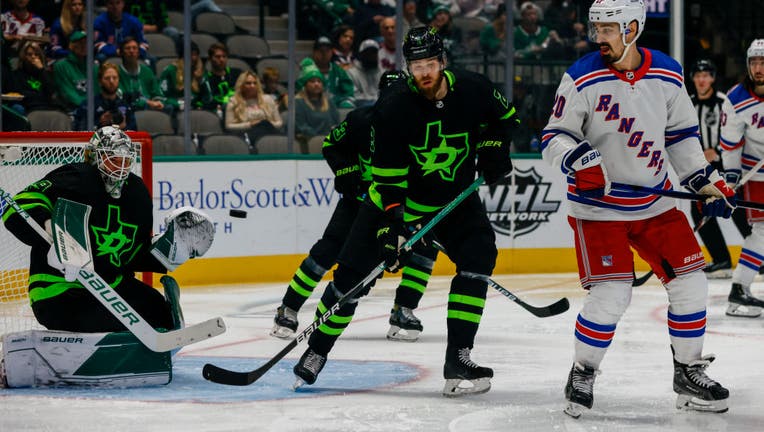 DALLAS, TX - OCTOBER 29: Dallas Stars goaltender Jake Oettinger (29) and defenseman Jani Hakanpaa (2) watch the puck fly by during the game between the Dallas Stars and the New York Rangers on October 29, 2022 at American Airlines Center in Dallas, T

DALLAS (AP) - Zac Jones and Julien Gauthier scored 19 seconds apart in the third period after Dallas goalie Jake Oettinger exited with an injury, and the New York Rangers beat the Stars 6-3 on Saturday.

Vincent Trocheck had two goals, including the last in a three-goal third period for New York and fourth against Scott Wedgewood, who replaced Oettinger in the second.

The Stars were already without standout defenseman Miro Heiskanen with an upper-body injury when Oettinger was sidelined by a lower-body injury in a 2-2 game.

Mika Zibanenad had a goal and two assists, and Chris Kreider also scored for the Rangers.

Jason Robertson had a tying goal for Dallas late in the second, but a potential go-ahead tally early the third was overturned when the Rangers challenged that the Stars were offsides.

Mason Marchment scored 69 seconds into the game for Dallas, and Roope Hintz had the first of two tying goals for the Stars.

Jones put the Rangers ahead with a shot from the high slot before Gauthier beat Wedgewood to a loose puck and put it into an empty net while diving forward for a 5-3 lead.

Igor Shesterkin had 30 saves for the Rangers.

Wyatt Johnston, the 19-year-old Dallas rookie with three goals already, played his last game before the Stars have to decide to keep him in the NHL or send him back to major junior hockey in the OHL.

Johnston isn't eligible for the Stars' AHL affiliate, the Texas Stars, and keeping him on the Dallas roster essentially means using the first year on his entry level contract.

Nils Lundkvist faced the Rangers for the first time since they traded him to Dallas just before training camp for conditional first- and fourth-round draft picks.

Lundkvist, a 22-year-old who entered the game leading Dallas defensemen with four points (four assists), had asked for a trade because he was buried on New York's depth chart. He didn't record a point.

Former captain Derian Hatcher and former general manager Bob Gainey were honored as part of the inaugural class of the Dallas Stars Hall of Fame.

The other charter members were automatic, including the club owners and the four players whose numbers have been retired in Mike Modano (9), Neal Broten (7), Sergei Zubov (56) and Jere Lehtinen (26).

Hatcher was captain and Gainey the architect of Dallas' only Stanley Cup-winning team in 1999. Modano, Zubov and Lehtinen also were on that team.

Rangers: A three-game trip wraps up with a back-to-back in Arizona on Sunday.

Stars: A three-game homestand ends Monday against the LA Kings.