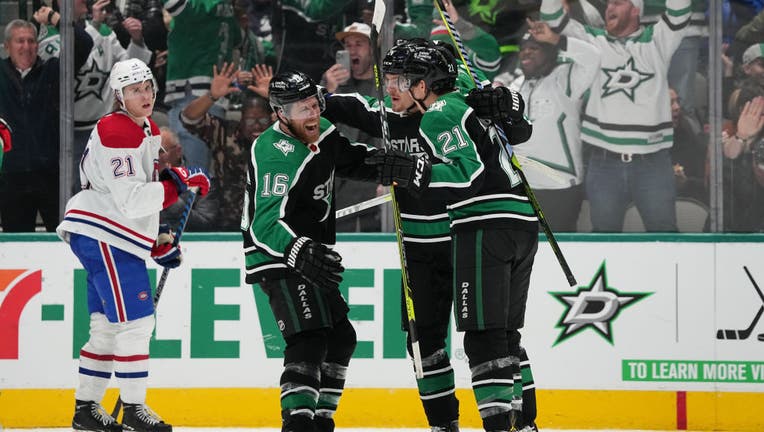 DALLAS, TX - DECEMBER 23: Roope Hintz #24, Joe Pavelski #16 and Jason Robertson #21 of the Dallas Stars celebrate a goal against XX at the American Airlines Center on December 23, 2022 in Dallas, Texas. (Photo by Glenn James/NHLI via Getty Images)

Roope Hintz scored twice on primary assists from Jason Robertson, and Joel Kiviranta added an empty-netter with 17 seconds left. Jake Oettinger made 22 saves for the Stars, who are 4-1-1 in their last six games.

Johnston put his own rebound past Jake Allen, giving the rookie a three-game goal streak. At 19 years and 223 days old, he’s the youngest Dallas player to score in three consecutive games.

Fourth-line forwards Jake Evans and Michael Pezzetta scored for the Canadiens, who have lost five of six (1-4-1). Allen stopped 32 shots.

Evans deked Oettinger and scored just before sliding into the crease 4:04 into the game to give the NHL’s worst power play a goal with two seconds left on the man advantage. Evans hadn’t scored since last April.

The Canadiens, coming in at 13.6% on the power play, had only one power-play goal on 30 chances in their previous nine games. Evans’ goal came against the league’s No. 4 penalty kill at 83.1%.

Pezzetta, who returned to the lineup after being a healthy scratch for two games, blasted a wrist shot off Oettinger’s stick and off the crossbar to give Montreal a 2-0 lead at 2:24 of the second period.

Hintz pulled the Stars to 2-1 at 15:19 of the second. Dallas tied it 2-all at 2:27 of the third on the same sequence — Hintz deflecting a shot by Robertson on the power play.

Pezzetta, with an assist on Evans’ goal, had the first multipoint game of his two-year NHL career.

Canadiens: Play the first of two consecutive games in Florida on Wednesday against the Tampa Bay Lightning.