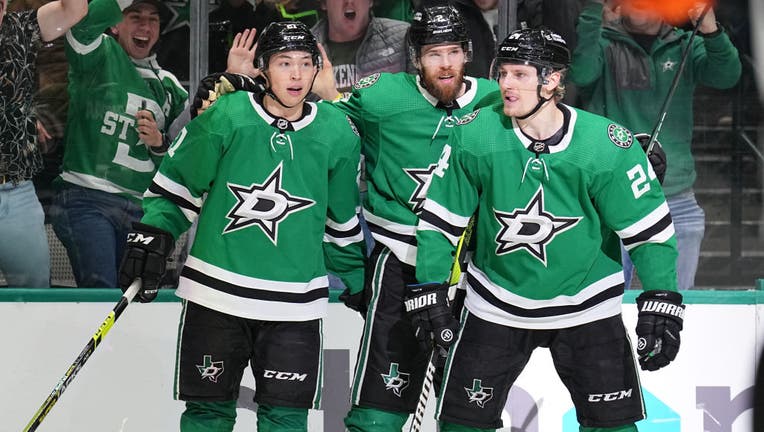 DALLAS, TX - JANUARY 8: Jani Hakanpaa #2, Roope Hintz #24 and Jason Robertson #21 of the Dallas Stars celebrate a goal against the Florida Panthers at the American Airlines Center on January 8, 2023 in Dallas, Texas. (Photo by Glenn James/NHLI via Ge

Defensemen Nils Lundkvist, Esa Lindell and Miro Heiskanen also scored for the Stars, who snapped a two-game losing streak that matched their longest of the season.

Carter Verhaeghe scored and Spencer Knight stopped 29 shots for the Panthers, who had won two straight to match their longest winning streak of the season.

Robertson, who was chosen last week to play in next month's All-Star Game at Florida, scored the game's first and last goals 16:45 into play and at 4:21 of the third period. He leads Dallas with 28 goals and 57 points and has points in nine of his last 10 games (five goals, 13 points).

Oettinger, among the players eligible to be voted onto the All-Star roster next week, earned his first win over the Panthers in five career starts.

Robertson took a touch pass from Joe Pavelski while skating on net through the right circle. His initial shot was kicked out by Knight's right skate, but bounded back to Robertson. He quickly lifted the rebound through a small opening hehind Knight's right shoulder into the net's roof late in the first period.

Robertson scooped up a loose puck alone in the offensive zone and, in near shootout fashion, scored on a wrist shot early in the third period, 23 seconds after the Panthers' third unsuccessful power play.

Lundkvist gave Dallas a 2-0 lead midway through the second period with a power-play goal on a one-timer that beat Knight on the stick side.

Verhaeghe converted a rebound 2:32 later for his 19th goal of the season that pulled Florida within 2-1, but Lindell sprinted through the slot and took a blind backhand pass from Jamie Benn along the right boards and restored Dallas' two-goal lead less than a minute later.
Heiskanen scored into an empty net with 4:11 to play.

Roope Hintz, Dallas' No. 2 scorer with 19 goals and 44 points, left late in the first period with an upper-body injury.

Stars: Begin a two-game trip to New York on Tuesday against the Islanders.