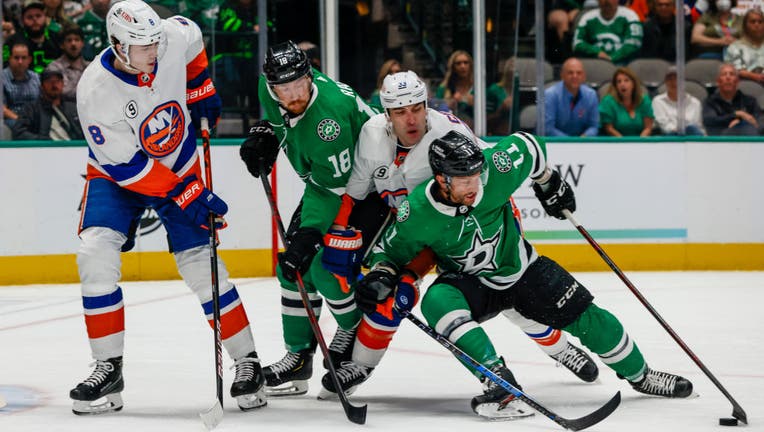 Marian Studenic and Tyler Seguin also scored for the Stars, who moved into the Western Conference’s second wild-card spot. They’re a point ahead of Vegas and one point behind Nashville. Jake Oettinger made 19 saves, including back-to-back stops on Adam Pelech and Mathew Barzal in the closing minutes.

"One (of the three teams) is going to have a hell of a year and miss it," Dallas coach Rick Bowness said of the West playoff race.

Jean-Gabriel Pageau and Brock Nelson scored for the Islanders, who had a season-best four-game winning streak snapped and trail Washington by 11 points for the East’s final wild card with 13 games to play. Semyon Varlamov, the NHL’s No. 3 star last week, stopped 37 shots.

Islanders coach Barry Trotz didn’t have to look beyond the Stars’ 40-21 edge in shots on goals, including 18-7 in the first period when Dallas scored twice.

"They create a lot of volume, and they won those races," Trotz said. "I thought we sort of gathered ourselves (after the first period), but we didn’t put the puck in play enough."

The tip in the crease by Faksa, the Stars’ checking line center, was saved but caromed off Pageau’s right blade behind Varlamov into the net at 10:29. It was an unlikely goal from Dallas’ special teams, which have gone 1 for 18 on power plays in the last seven games and 0 for 8 in the last three games.

Faksa had to be helped to the dressing room late in the first period after taking a shot from teammate Joel Hanley to his left knee and but took his regular shifts beginning with the start of the second period.

"He was tough," Bowness said of Faksa. "When I went to see him right after the period: ‘I’ll be back.’ "

Studenic scored the first goal 7:29 into the game and his first in seven games since being acquired off waivers from New Jersey on Feb. 24. He converted a rebound from the left circle for his second goal of the season and fourth in three NHL seasons. New York unsuccessfully challenged for goalie interference against Jamie Benn.

Pageau tied it at 1 at 11:47 of the first period with a quick encore to his Sunday hat trick at New Jersey. He raced from the Isles’ blue line up right wing and ripped a wrister over Oettinger’s right shoulder.

Seguin put Dallas back ahead 46.6 seconds before the first period ended, redirecting Joel Hanley’s shot from the left point for his 20th of the season.

Nelson’s career-best 33rd goal 31 seconds into the second period tied the score 2-2. He slid a wrist shot between Oettinger’s pads from the slot on the rush. Nelson had a hat trick in the Islanders’ 4-2 home win over the Stars on March 19.

Noah Dobson had two assists for the Islanders for a career-high 40 points.

The Stars played in Seattle on Sunday night and, because of issues on both ends of the trip, didn’t arrive in Dallas until 12:37 a.m. Tuesday. They’d already planned to take Monday off in Texas but did so in Washington, landed six hours late because of bad weather, and skipped their morning skate on Tuesday.

This is Seguin’s eighth 20-goal season, his seventh since coming to Dallas in 2013. ... Islanders forward Josh Bailey assisted on Pageau’s goal for his 545th career point, breaking a tie with John Tonelli and moving him into eighth place in franchise history.

Islanders: At Carolina on Friday for their fourth of five consecutive road games.

Stars: Hosts Toronto on Thursday in the middle game of a three-game homestand.