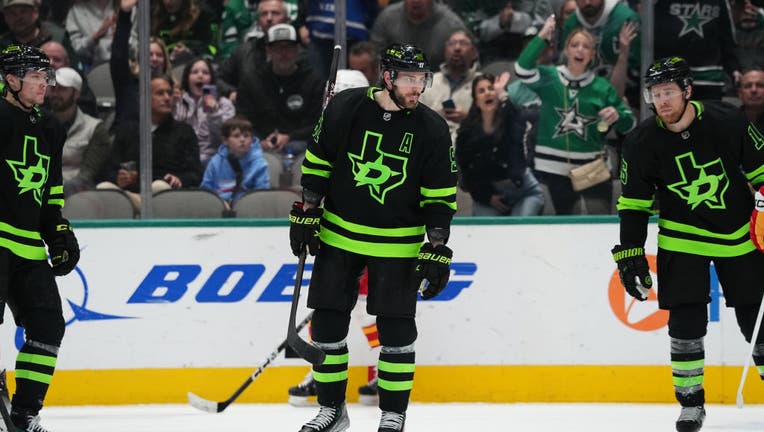 DALLAS, TX - JANUARY 14: Tyler Seguin #91 of the Dallas Stars celebrates a goal against the Calgary Flames at the American Airlines Center on January 14, 2023 in Dallas, Texas. (Photo by Glenn James/NHLI via Getty Images)

DALLAS (AP) - Nazem Kadri’s team-best 17th goal and Chris Tanev’s first of the season were part of Calgary’s four-goal second period as the Flames hung on to beat the Dallas Stars 6-5 on Saturday.

Andrew Mangiapane scored just 25 seconds into the game and Trevor Lewis, Elias Lindholm and Rasmus Andersson also had goals for the Flames. Calgary led 6-1 late in the second period and has earned points in it last five games (3-0-2).

Dan Vladar made 29 saves to win his second straight start in a matchup of backup goaltenders. The Flames hold the first wild-card position in the West.

Joe Pavelski had two goals and an assist for the Stars, who are winless in two straight and four of their last six games. Tyler Seguin had a goal and an assist and Jamie Benn and Colin Miller also scored for Dallas. Scott Wedgewood made 30 saves in his 13th start of the season.

The Stars and Winnipeg Jets are tied with the most points in the Central Division (57), the Jets having one game in hand.

Flames coach Darryl Sutter said he didn’t become anxious as the lead decreased from five goals to one.

Seguin began the Stars’ rally, scoring from the slot with 46 seconds remaining in the second period. Pavelski scored at 7:19 and 12:54 of the third, and Miller cut the deficit to one at 15:23.

"The second period gets away from us; that’s the disappointment on the night," Pavelski said. "It was fun at having a shot at tying it up again, but it’s a big hole."

Lewis and Lindholm scored on the power play to match the team high for power-play goals this season after the Flames were shut out with the man advantage in five of their previous six games.

The six goals allowed matched the most this season by Dallas, which went into play second in the NHL with a 2.55 goals-against average.

Kadri, Tanev and Andersson also had an assist.

Kadri’s goal at 13:07 through traffic from 35 feet for a 4-1 lead was unsuccessfully challenged by Dallas for being offside. Tanev’s drive from the right point was Calgary’s last of the period, at 17:57, giving the Flames a 6-1 lead.

Mangiapane scored only 25 seconds in on the game’s first shot on goal, a backhander at the crease on a pass by Blake Coleman from behind the goal line that ricocheted off Mikael Backlund.

Lewis, Calgary’s 36-year-old fourth-line center, has eight goals in his 15th NHL season. He’s on pace to pass his season-best 14 scored with the Los Angeles Kings in 2017-18. It was his third career power-play goal.

"And we’ve put him in situations where he’s playing with kids," Sutter said.

Calgary’s Jonathan Huberdeau and MacKenzie Weegar and Dallas’ Jason Robertson and Miro Heiskanen each had two assists. Robertson was fourth in the NHL with 58 points going into play and has points in 11 of the last 13 games. … Benn scored Dallas’ sixth shorthanded goal of the season, two short of the league high, in his 992nd career game for the Minnesota-Dallas franchise that began in 1967. That tied Neal Broten for second place behind Mike Modano (1,459). … Seguin has 400 career assists. … Calgary leads the NHL with 49 first-period goals and is 11-1-2 when leading after one period.

Flames: Will end a five-game Central Division road trip on Monday against the Nashville Predators.

Stars: Will begin a three-game Pacific Division road trip on Monday against the Vegas Golden Knights.