It was a busy four-day stretch at the American Airlines Center with both home teams in the playoffs. The Mavericks bounced back to tie their playoff series with the Suns and the Dallas Stars will try to extend their lead in their series with the Flames Monday night. FOX 4's Mike Doocy has more.

Paul was out of Game 4 early in the fourth quarter, the period when he often dominated the Mavericks during an 11-game winning streak that ended with consecutive home victories for Dallas. Game 5 is Tuesday night in Phoenix.

Dorian Finney-Smith scored a playoff career-high 24 points on the most 3-pointers he’s had, regular season or playoffs. He was 8 of 12 from deep, including consecutive 3s for a 14-point lead midway through the fourth.

Dallas matched its 20 3s (20 of 44) from a Mother’s Day rout of the Los Angeles Lakers in 2011, a win that completed on a four-game sweep in the second round on the way to the championship. The Mavericks are playing beyond the first round for the first time since then.

Devin Booker scored 35 points for the Suns, who dropped two straight on road with a 2-0 lead just as they did in last year’s NBA Finals. Milwaukee won the last four to take the title. Top-seeded Phoenix lost consecutive games for the first time in the playoffs.

Turnovers were the story with Paul in Dallas’ Game 3 win, when the 37-year-old had the most in any half for his playoff career with seven before halftime.

This time it was fouls, and it started when coach Monty Williams put him back in the game with three in the final minute of the first half. Paul picked up his fourth just before the halftime buzzer when he tried to rebound his own miss and bumped Doncic.

Just 2 1/2 minutes into the second half, Williams had no choice but to use his challenge when Paul stopped and backed into Jalen Brunson as Paul started bringing the ball up the court. The fifth foul was upheld on review.

The sixth also came against Brunson just a minute and a half after Paul had returned in the fourth. Paul finished with five points.

Booker kept the Suns close into the fourth quarter despite long stretched without his backcourt mate, but Doncic eventually wore them down with post-ups and other drives for buckets or assists. He had 11 assists. 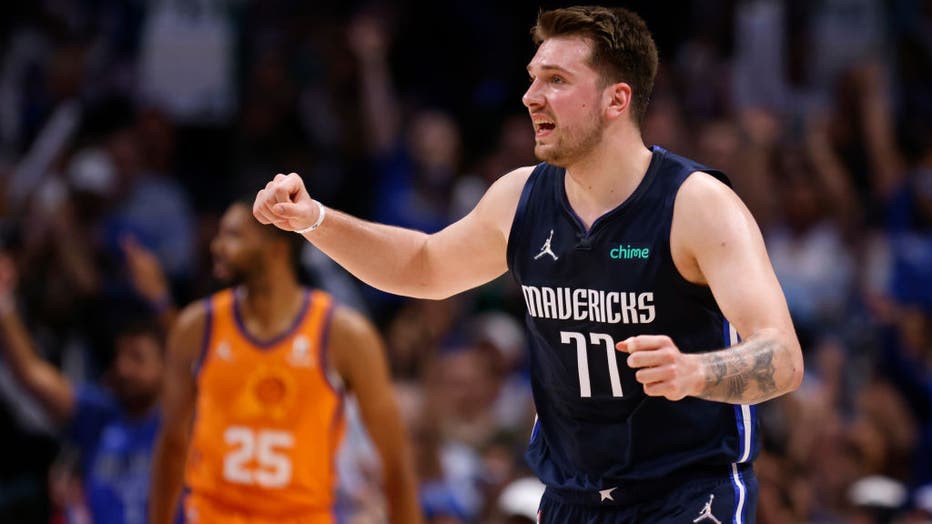 DALLAS, TX - MAY 8: Luka Doncic #77 of the Dallas Mavericks after a three point shot against the Phoenix Suns during the first half of Game Four of the 2022 NBA Playoffs Western Conference Semifinals at American Airlines Center on May 8, 2022 in Dall

Official James Williams called three technicals in the first half. The first was on Doncic, who couldn’t believe there wasn’t a call when Ayton crunched him and Jae Crowder flung him to the floor in the same sequence. Doncic had words for Williams also before getting the tech.

Booker got one for keeping his elbow up in Dwight Powell’s face when he jumped into Powell to draw a foul after the Dallas center fell for the pump fake. Powell picked up the third after he was called for an offensive foul on a rebound.

Suns: Crowder kept Phoenix afloat early when the Mavericks were shooting better than 60% from 3, hitting a couple from deep. He finished with 15. Deandre Ayton had 14 points and 11 rebounds.

Mavericks: Finney-Smith’s five 3s in the first half were his most in any half in his career, regular season or playoffs. ... Brunson scored 18 points. Davis Bertans started 4 of 4 from 3 and finished with 12 points.