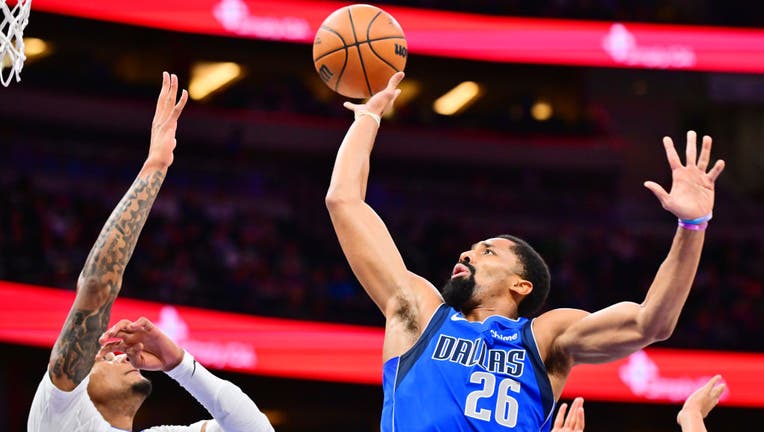 ORLANDO, FLORIDA - NOVEMBER 09: Spencer Dinwiddie #26 of the Dallas Mavericks shoots the ball against Chuma Okeke #3 of the Orlando Magic in the first half at Amway Center on November 09, 2022 in Orlando, Florida. NOTE TO USER: User expressly acknowl

ORLANDO, Fla. (AP) - Franz Wagner scored 22 points and the Orlando Magic held Luka Doncic under 30 points for the first time this season in a 94-87 win over the Dallas Mavericks on Wednesday night.

Doncic, the NBA's leading scorer, finished with 24 points after scoring 30 or more in each of the Mavericks' first nine games. He shot 9 for 29 overall and 2 for 11 from 3-point range.

Spencer Dinwiddle scored 29 points for the Mavericks, who were outrebounded 49-29.

The Magic played for the first time without rookie Paolo Banchero, who sprained his ankle Monday night.

Wendell Carter Jr. had 13 points and 12 rebounds for Orlando, and Jalen Suggs had 12 points and seven rebounds.

The start of the game was moved up by 90 minutes due to the approach of Hurricane Nicole.

Dinwiddie's layup early in the second quarter put Dallas up 34-24, the Mavs' only double-digit lead of the game.

Dallas led 83-82 when Dinwiddie scored with 6:02 remaining, but the Magic answered with eight straight points in a 3 1/2-minute stretch in which Doncic missed two free throws.

Mavericks: Dallas planned to bus to Tampa, away from the worst of the approaching storm, to fly to Washington for Thursday night's game against the Wizards. ... F/C Christian Wood missed his first game of the season with a sprained left knee. ... G Tim Hardaway Jr., who left Monday's game at Brooklyn with a left hip strain, played 22 minutes.

Magic: The Magic are hopeful that Banchero, who leads NBA rookies in scoring (23.5) and rebounds (8.3), will miss only one game. ... G Kevon Harris sat out the game with a left rib contusion.