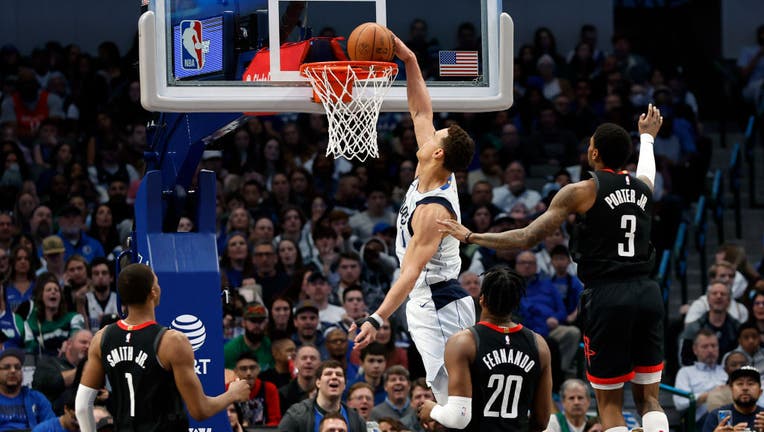 DALLAS, TEXAS - DECEMBER 29: Dwight Powell #7 of the Dallas Mavericks dunks against Kevin Porter Jr. #3 of the Houston Rockets in the first half at American Airlines Center on December 29, 2022 in Dallas, Texas. NOTE TO USER: User expressly acknowled

DALLAS (AP) - Luka Doncic followed his 60-point triple-double two nights earlier with 35 points in his NBA-best eighth triple-double of the season, and the Dallas Mavericks beat the Houston Rockets 129-114 on Thursday night.

Doncic, who recorded the NBA’s first game with 60 points and 21 rebounds to go with 10 rebounds on Tuesday against the New York Knicks, had 12 rebounds and 13 assists in 34 minutes as Dallas ran its winning streak to a season-best five games. He clinched the triple-double with his 10th assist with 5:37 remaining in the third quarter, giving him consecutive triple-doubles twice this season.

Christian Wood, acquired from Houston last summer, had 21 points, hitting 5 of 8 3-pointers, and a season-high five blocks for the Mavericks, who led by as many as 25 points. Dwight Powell added a season-high 19 points off the bench and Tim Hardaway Jr. had 18.

Jalen Green scored 23 points, Kevin Porter Jr. 17 and Jabari Smith Jr. 16 for the Rockets, who lost for the seventh time in eight games.

Doncic scored 21 first-half points in 18 minutes thanks to a 35-footer at the buzzer after Dallas inbounded from the baseline with 1.5 seconds left. The Mavs led 65-51.

Rockets: Were outscored 25-5 on fast-break points. … Smith scored 14 in the first quarter, hitting 6 of 7 shots.

Mavericks: The 2021-22 Western Conference finalists are four games above .500 for the first time this season. … Doncic received his ninth technical foul this season, one of those having been rescinded.

Rockets: Will host the New York Knicks on Saturday before hosting Dallas again next Monday.

Mavericks: Will begin a two-game Texas road trip on Saturday against the San Antonio Spurs.