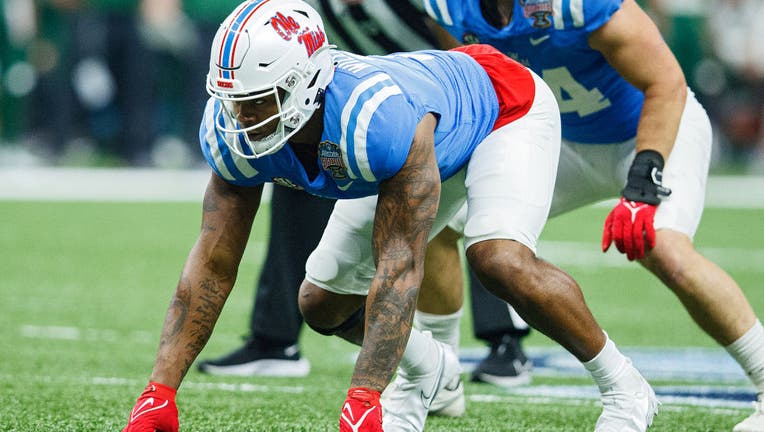 NEW ORLEANS, LA - JANUARY 01: Ole Miss Rebels defensive lineman Sam Williams (7) lines up for a play during the Allstate Sugar Bowl between the Baylor Bears and the Ole Miss Rebels on January 1, 2022 at the Ceasars Superdome in New Orleans, Louisiana

The addition of Williams comes after the Cowboys unexpectedly lost defensive end Randy Gregory to Denver in free agency. Dallas had anticipated re-signing its second-round pick from 2015.

Williams was a third-team All-American last season after setting an Ole Miss record with 12 1/2 sacks. He tied for 10th nationally with four forced fumbles.

Like Gregory seven years ago, Williams joins Dallas with a history of off-field issues. He was suspended at Ole Miss in July 2020 after being charged with sexual battery. Williams was reinstated two months later after the charge was dropped.

The defensive pick by the Cowboys came after they took Tulsa offensive lineman Tyler Smith in the first round. Dallas had the 88th overall pick in the third round later Friday.

The Dallas defense had a dramatic turnaround under first-year coordinator Dan Quinn last season. The opportunistic unit led the NFL with 34 takeaways.

Williams could have a chance to start opposite DeMarcus Lawrence, a 2014 second-round choice who is returning on a reworked contract three years after signing a $105 million, five-year deal.

The Cowboys added 2015 first-round choice Dante Fowler in free agency and have high hopes for Dorance Armstrong after re-signing one of their fourth-round picks from 2018.

Williams joined Ole Miss after recording 17 1/2 sacks at Northeast Mississippi Community College in 2018. He led the Rebels in sacks his first year with six.