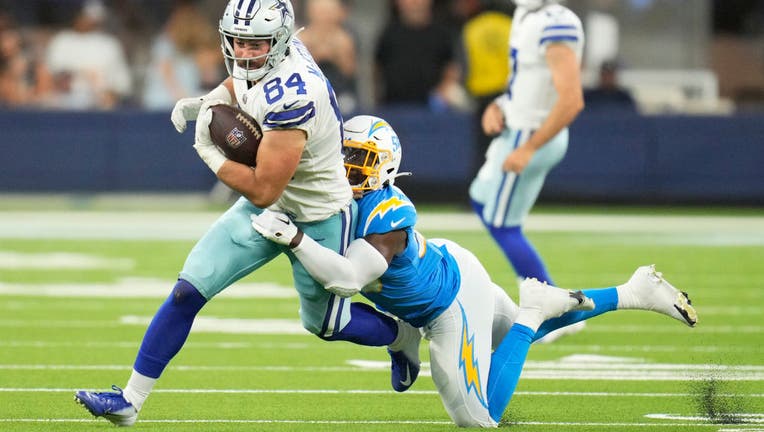 Inglewood, CA - August 20: Tight end Sean McKeon #84 of the Dallas Cowboys catches a pass for first down against the Los Angeles Chargers in the second half of a NFL Pre-Season football game at SoFi Stadium in Inglewood in Inglewood on Saturday, Augu

INGLEWOOD, Calif. (AP) - KaVontae Turpin is making the most of his first chance to make a National Football League roster.

The Dallas wide receiver became the first player in nine seasons to have kickoff and punt return touchdowns in the same game, leading the Cowboys to a 32-18 victory over the Los Angeles Chargers on Saturday night.

"My body’s still wild, but I’m still here trying to focus. I got this big opportunity, so I can’t really complain about it. I work through it," Turpin said.

Turpin signed with the Cowboys on July 28 after garnering MVP honors in the United States Football League this past spring. Before Turpin, the last player to run back a punt and kickoff in the same game — preseason, regular season or playoffs — was Detroit's Jeremy Ross on Dec. 8, 2013, against Philadelphia.

"Obviously, he had a very successful run there with the USFL, but really from the first day of practice, I mean, he came in and I was really impressed with the way he picked up the receiver play and the language," McCarthy said. "But you can see he’s dynamic in the return game. Two excellent big plays set the tempo."

Turpin had six special teams touchdowns during his collegiate career at TCU, but he was dismissed in 2018 when he was accused of assaulting his girlfriend. He was initially suspended but then kicked off the team because the school was unaware of a previous assault case in New Mexico. Turpin pleaded guilty in the Texas case with a chance to clear the conviction from his record and attended an abuse intervention program.

After going undrafted in 2019, Turpin played in the indoor Fan-Controlled Football League, the Spring League and the European League of Football for three years before signing with the USFL. As a member of the New Jersey Generals, he led the league in receiving yards and had the lone punt return for a TD.

"It’s been a crazy year, you know. I’ve been playing football all year round, so I haven’t got a chance to get my body back," Turpin said. "I’m just happy for this opportunity the Cowboys gave me after the USFL to come out here and show everybody what I can do, prove to myself I belong in this league."

After a 22-yard field goal by Dustin Hopkins gave the Chargers a 3-0 lead midway through the first quarter, Turpin returned the ensuing kickoff 98 yards for a touchdown.

Turpin got a nice wall of blockers in the middle of the field before getting into open space near the 40 and going untouched up the right sideline.

Dallas had a 29-10 lead at halftime after a pair of touchdowns in the final minute of the second quarter. That included Turpin's 86-yard punt return, where he eluded a tackle attempt from punt gunner Deane Leonard after fielding the ball, did a couple juke moves and then broke free for the score.

After two days of joint practices earlier in the week, both teams rested most of their starters. Dallas improved to 1-1 while the Chargers are 0-2.

Cooper Rush and Will Grier each directed first-half TD drives for the Cowboys, while Rico Dowdle and Malik Davis each had rushing scores. Dowdle finished as the game's leading rusher with 44 yards on 13 carries.

RELATED: Dak Prescott gets plenty of work during joint practices with Chargers

Easton Stick played the first half for the Chargers and connected with Joshua Palmer on a wide receiver screen for an 18-yard touchdown early in the second quarter to give the Chargers a short-lived 10-7 advantage. Palmer finished with three receptions for 75 yards.

"It was a really poor first half for us, about as poorly as you can play, and that really put us behind, overall," Chargers coach Brandon Staley said. "I didn’t like the way that that first half felt or looked. It was really in all three phases. When you have two turnovers and you give up two special teams touchdowns, that’s the way the score is going to look."

Chargers' wide receiver Michael Bandy had eight catches for 69 yards, including a 1-yard TD late in the fourth quarter.

Chargers: RB Isaiah Spiller suffered an ankle injury during the second half and did not return.

Cowboys: Finish the preseason at home against Seattle on Friday.

Chargers: Travel to New Orleans for their preseason finale on Friday.