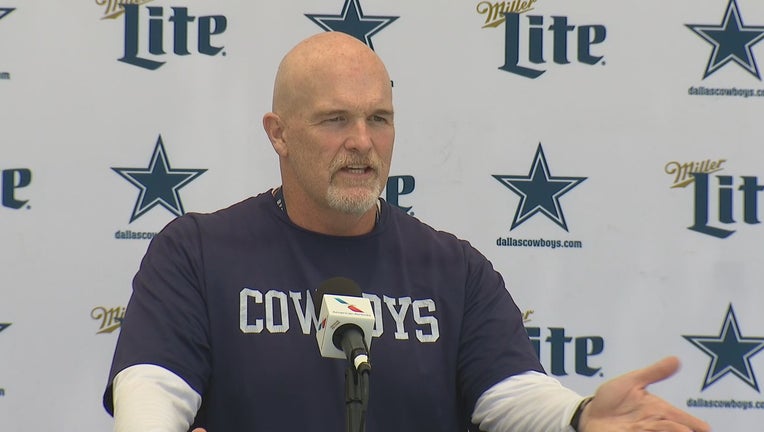 OXNARD, Calif. - The Dallas Cowboys played a game at low-speed intensity at training camp in California.

Coach Mike McCarthy called it a walk-through without pads or helmets.

And with nothing else interesting going on at camp, reporters started asking questions about whether another NFL team might try to hire away Dallas assistant coaches.

And there was revival of talk that if the head coach is fired, the job might go to a former head coach turned defensive coordinator – Dan Quinn.

"I’ve been in his seat. And uh, you control what you can. Even that can be hard, let alone the things you can’t control. So, I know in that seat I had someone who would help look around corners for me in Atlanta. That was a guy named Raheem Morris who’d say, ‘Hey, Dan, think about this.’ Uh, that’s one of the nice parts for me that I get to look around some of those corners for Mike to point out some things. This might be coming down the road. Let’s look at this. So, I just wanted it in no uncertain terms make sure, I’m looking around the corners. I ain’t coming around the corner," Quinn said.

The Cowboys are back on the practice field Thursday in Oxnard.

They place the Broncos in a preseason game in Denver a week from Saturday.