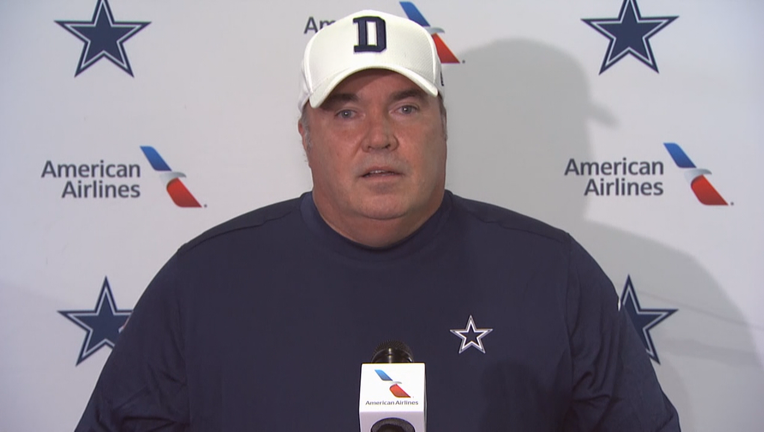 FRISCO, Texas - For the first time since all of his players reported for training camp, new Cowboys head coach Mike Mccarthy gave the media an update on how things are going.

The NFL announced that players and staff would be required to get multiple negative test results before entering training facilities.

There's never been a camp quite like this one, and McCarthy has been forced to improvise.

“I would say we had six or seven plans just in the course of the three weeks leading up to it, just because you want to anticipate it because there is so much of the unknown, particularly with all the adjustments that we made to our facility just with COVID,” McCarthy said.

The entire team has only been together at The Star in Frisco for about a week now, and McCarthy's message to his players in the age of COVID-19 is for them to be careful.

The most important relationship McCarthy has to develop is with quarterback Dak Prescott, who is playing under the franchise tag after no long-term deal was agreed upon.

McCarthy said Prescott has done a good job so far.

"Just being around each other for the first time, I really enjoyed his personality. He's very upbeat, very driven," McCarthy said. "So I would say he's kind of picked up where he left off, from what I've been told about him, as far as how he operates. Very detailed in his preparation, he's a lot of fun to be around."

Prescott and other Cowboys have been speaking out about social injustice issues.

Cowboys owner Jerry Jones has been quiet on the subject, given his previous stance of players standing for the national anthem.

McCarthy discussed whether he's discussed these issues with his players.

"Those conversations, as far as social injustice, whether it's, you know, the national anthem, whether it's COVID-19, these are everyday type focuses for us," he said. "I think we all are touched by everything going on. I know for me, personally, it's made me take a hard look at the blind spots that I may have in my life, from my experiences. The one thing I do know, is something that will continued to be echoed in football operations, is to take a step back and listen. I think we all need to listen more. How can we really be part of the progress? I think the organization's statement of protest to progress was right on the money. So that's really where our focus will be, and we'll definitely support our players."