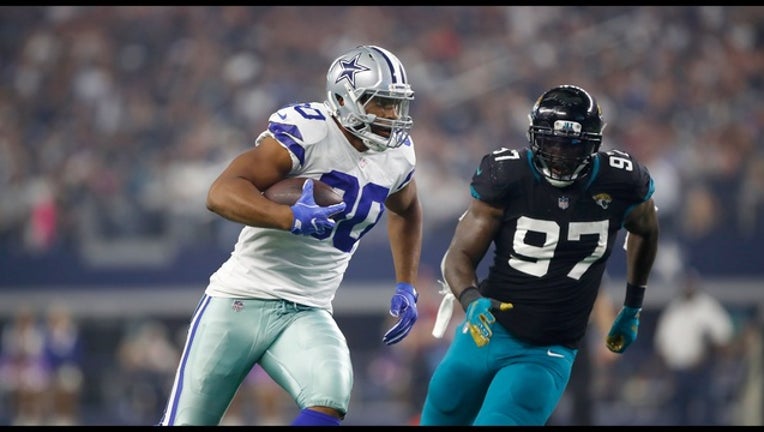 Rico Gathers of the Dallas Cowboys carries the ball as he his pursued by Malik Jackson #97 of the Jacksonville Jaguars in the second quarter of a game at AT&T Stadium on October 14, 2018 in Arlington, Texas. (Photo by Wesley Hitt/Getty Images)

OXNARD, Calif. (AP) - The Dallas Cowboys are waiving tight end Rico Gathers, ending three years of steady progress with the club for the former Baylor basketball player who chose to pursue pro football over a shot at the NBA.

The 25-year-old Gathers' status on the roster became more tenuous when 11-time Pro Bowler Jason Witten came out of retirement after a year in broadcasting. Gathers also missed time at training camp with an ankle injury before Monday's decision.

Gathers hadn't played football in a decade when he decided after four years in the Baylor basketball program that he would make himself eligible for the NFL draft. One of the best rebounders in Big 12 history was a long shot to get taken, but the Cowboys grabbed the 6-foot-6 Gathers with their final pick in the sixth round in 2016.

After a year on the practice squad and a season on injured reserve because of symptoms from a concussion, Gathers made the team last year. He played in 15 games with four starts, catching three passes for 46 yards.

Gathers is still facing a one-game suspension to start the season for violating the NFL's substance-abuse policy. He was arrested on a marijuana possession charge last year.