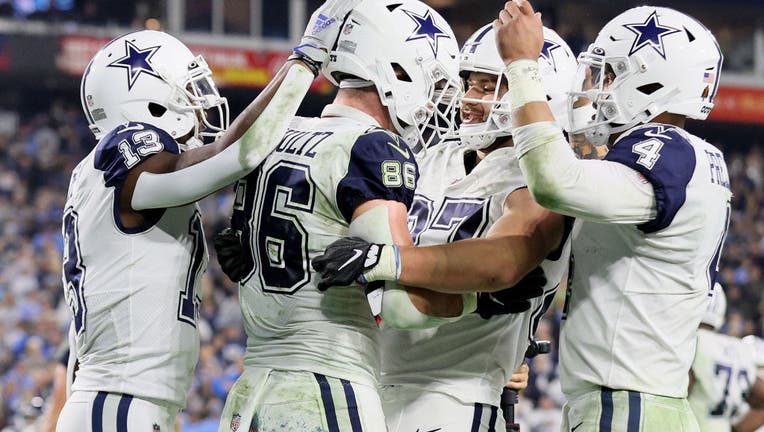 NASHVILLE, TENNESSEE - DECEMBER 29: Dalton Schultz #86 of the Dallas Cowboys celebrates with Michael Gallup #13, Jake Ferguson #87 and Dak Prescott #4 after scoring a six yard touchdown against the Tennessee Titans during the third quarter of the gam

NASHVILLE, Tenn. (AP) - Dak Prescott threw for 282 yards and two touchdowns to Dalton Schultz as the Dallas Cowboys beat the banged-up and resting Tennessee Titans 27-13 on Thursday night for their sixth win in seven games.

The Cowboys (12-4) posted their first back-to-back 12-win seasons since 1994 and 1995, when Dallas won its last of the franchise’s five Super Bowl titles. Fans were chanting "Let’s go Cowboys!" throughout the game.

The Cowboys still need to finish the regular season by winning at Washington with Philadelphia (13-2) losing out for a chance at a second straight NFC East title. Otherwise, they will be locked into the No. 5 seed in the NFC.

The Titans (7-9) lost their sixth straight hours after placing quarterback Ryan Tannehill on injured reserve, ending his season unless they reach the AFC championship. They have 22 players on injured reserve and lead the NFL using at least 83 different players.

This game was meaningless for Tennessee in the standings, with next week’s regular-season finale at Jacksonville deciding the AFC South title. So the Titans scratched seven starters, not counting two others put on IR with Tannehill. Those watching included Derrick Henry, the NFL’s second-leading rusher.

The Titans gave Joshua Dobbs, signed Dec. 21 off Detroit’s practice squad, his first NFL start instead of rookie Malik Willis, their third-round pick in April. The former University of Tennessee star played his last college game on this field, a 2016 Music City Bowl win over Nebraska.

He had more yards passing by halftime than Willis managed in any of his first three starts. Dobbs finished with 232 yards and the first TD pass of his career, a 7-yarder to Robert Woods, that pulled the Titans within 17-13 late in the third.

The Cowboys scored the final 10 points. Prescott capped a 75-yard drive with his second TD pass to Schultz for a 24-13 lead early in the fourth. Brett Maher added his second field goal for the final margin.

Dallas led only 10-6 at halftime thanks to three turnovers, including two interceptions by two-time All-Pro safety Kevin Byard that set up field goals by Randy Bullock. That gave Prescott a career-high 14 picks, tying him with now-benched Raiders quarterback Derek Carr for most in the NFL.

That’s despite Prescott missing five games with a broken thumb. The Dallas quarterback has been picked off in six consecutive games for the first time in his career.

Prescott took advantage of the ailing Titans defense, finding CeeDee Lamb for 11 catches for 100 yards. When undrafted rookie cornerback Tre Avery was flagged for grabbing Michael Gallup on third-and-19, Prescott threw a 6-yard TD pass to Schultz on the next play midway through the third for a 17-6 lead.

Dallas center Tyler Biadasz hurt his right ankle when Titans defensive end DeMarcus Walker rolled up on his leg late in the third quarter. That forced Connor McGovern to slide over from left guard, Tyler Smith from left tackle to guard with Jason Peters coming in for Smith. Biadasz did not return.

Dallas wraps up the regular season at Washington.

Follow below for updates on the game between the Dallas Cowboys and Tennessee Titans. Mobile users click here.