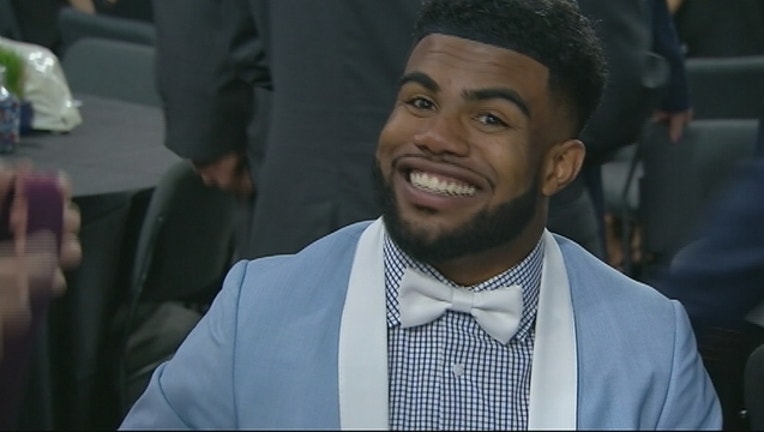 It's the highest Dallas has drafted a running back since taking Hall of Famer Tony Dorsett second overall in 1977. All-time NFL rushing leader Emmitt Smith went 17th to the Cowboys in 1990.

Running back wasn't the biggest need going into the draft with Darren McFadden coming off a strong season and the Cowboys adding two-time Pro Bowler Alfred Morris from Washington in free agency. But the Cowboys will get to put the top-rated running back in the draft behind one of the NFL's best offensive lines. Dallas took blockers in the first round three times in a span of four seasons starting in 2011.

Elliott was one of the stars when the Buckeyes won the national championship at the home of the Cowboys during the 2014 season, He rushed for an Ohio State bowl-record 246 yards with four touchdowns in a 42-20 victory over Oregon.

The 6-foot, 225-pound Elliott was the No. 2 all-time rusher at Ohio State with 3,961 yards, trailing only two-time Heisman Trophy winner Archie Griffin. That included a school-record 3,699 yards over two seasons in 2014 and 2015. He declared for the draft after his junior season.

The Cowboys decided to spend their highest pick since 1991 at running back a year after electing not to re-sign 2014 NFL rushing champion DeMarco Murray in free agency.

But the Dallas running attack was inconsistent early last season without Murray, improving only after McFadden replaced lead back Joseph Randle six games into the season. The Cowboys eventually released Randle.

Dallas' biggest need going into the draft was defensive end, but top target Joey Bosa, a teammate of Elliott at Ohio State, went to San Diego with the third pick.

If Elliott can win the starting job over McFadden and Morris, he will get a chance to play with quarterback Tony Romo and 2014 All-Pro receiver Dez Bryant.

Romo missed 12 games last season with a twice-broke left collarbone, a big reason the Cowboys had such a high pick following a first-to-worst slide to 4-12 and the bottom of the NFC East. Bryant was out five games after breaking his right foot in the opener. He also missed the final two games as the injury continued to bother him all season.