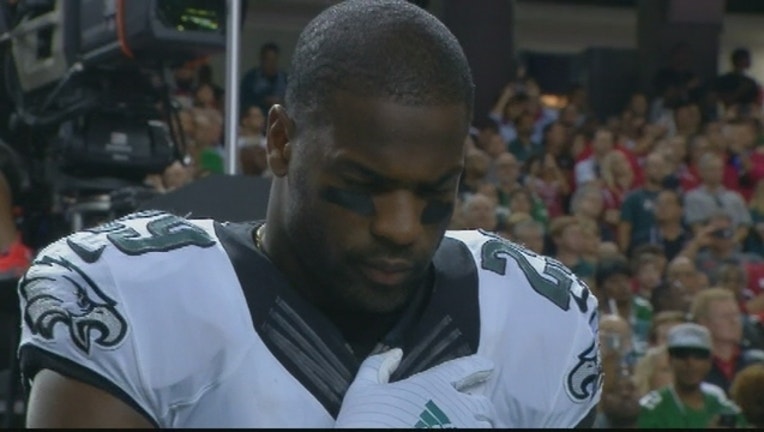 IRVING, Texas (AP) — Jason Witten glared at reporters, mostly out of determination and not anger because the affable Dallas tight end was trying to make a point about facing former teammate DeMarco Murray for the first time.

Never mind that Murray helped redefine the Cowboys' offense while leading the NFL in rushing for a playoff team and breaking Emmitt Smith's franchise record with a league-best 1,845 yards. That's so last year. And so last team, after Murray took big money from NFC East rival Philadelphia in free agency.

"There is no reunion to this deal," Witten said Dallas' game Sunday at the Eagles (0-1). "Let's not make it bigger than what it is. It happens all the time in the NFL. Let's go on. We're going up there to win a football game."

One of coach Jason Garrett's pet sayings is "nameless, faceless opponents," and a mannequin with a jersey and football pants made a rare showing in a hallway near the locker room this week. It was positioned so that players could see it entering and exiting team headquarters.

Garrett flatly rejected the idea that was a special appearance for the faceless figure with a white No. 55 jersey — no name on the back, of course. A team spokesman further explained that the mannequin accompanied the team to training camp in California.

This week or otherwise, the Cowboys (1-0) are getting the message.

"He's a good back, a good downhill runner, a guy that had a lot of success here in this locker room," cornerback Brandon Carr said. "He's on the other side of the field. We take it as a nameless, faceless opponent and we're going to get after these guys and do our job."

There's that phrase again, prompting a question for Carr about the mannequin.

Sound automated? Check out defensive end Jeremy Mincey, who was asked if he would seek out Murray for a pre-game handshake.

"I've got to be a programmed robot before the game starts so I'll probably stay in this week," Mincey said.

Murray was equally dismissive as the obvious choice by Dallas reporters for their weekly conference call with one of the opposing players.

He used the word "normal" three times in the first three questions, and joined his former teammates in rejecting the idea that it was a difficult offseason on both sides of the decision to turn down less money for the $42 million, five-year contract he got from the Eagles.

Tony Romo, who parlayed Murray's success into a franchise-record passer rating of 113.2, wasn't quite sure how to take a question about whether he used the spring to come to terms with the loss of a back that was such a boost for him.

"I have a job to do and it takes up enough of my time, getting myself ready to play," Romo said. "I don't analyze what everybody else is thinking and the approach for who's here or who's not here."

Joseph Randle, Murray's backup for two seasons, led Dallas with 16 carries for 65 yards in the first game without him, a 27-26 victory over the New York Giants on Sunday night. But the third-year back doesn't see the game as Randle vs. Murray.

"We're going to focus on us," Randle said. "We always pride ourselves on winning the rushing title every week. That'll be the same this week, too."

Safety Barry Church has to help stop a Philadelphia rushing attack that was more effective with the shifty moves of Darren Sproles than the power of Murray in the opening loss to Atlanta. So he at least has to know who's in the backfield for the Eagles.

But beyond that, Church is living the "nameless, faceless" mantra of Garrett — just like the mannequin.

"But we call him Randy, though," Church said.

Wait, what? Well, at least they're not calling it "DeMarco."