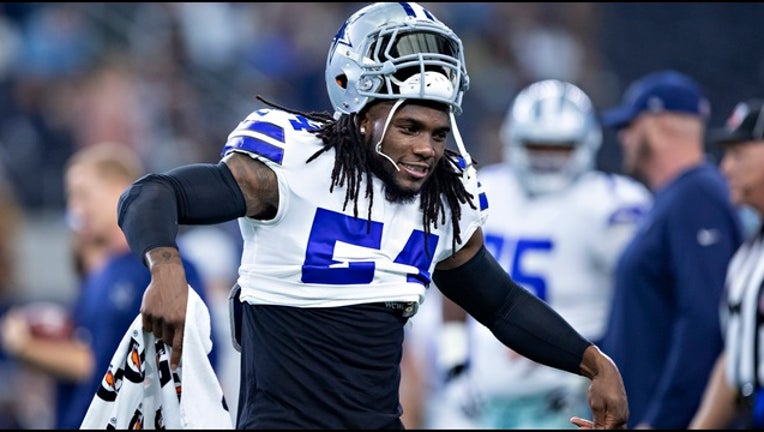 Jaylon Smith #54 of the Dallas Cowboys warms up with a dance before a game against the Washington Redskins at AT&T Stadium on November 22, 2018 in Arlington, Texas. The Cowboys defeated the Redskins 31-23. (Photo by Wesley Hitt/Getty Images)

"Early in the year, they gave up some points and yards and things like that, but you just really look at them in their last I guess three or four ballgames," Linehan said.

The more recent version of New Orleans' defense hasn't allowed more than 17 points in any of its past three games.

"They're just really doing a good job of getting stops and creating negative plays for the other team, whether it be sacks or turnovers," Linehan said. "We've got a big challenge."

Indeed, for all the offensive star power in Thursday night's Saints-Cowboys clash - from New Orleans' Drew Brees, Michael Thomas and Alvin Kamara to Dallas' Dak Prescott, Ezekiel Elliott and Amari Cooper - it is also about defenses that have played well lately. Or in the Cowboys' case, most of the season.

Dallas has not allowed an opponent to score more than 23 in any of its past three games, has not allowed 30 points in a game all season and ranks third in the NFL in points allowed per game at 19.4.

"They're playing extremely well," Saints coach Sean Payton said of the Dallas defense. "Their front gets after the quarterback. I think that their back end is really good relative to their scheme. ... They're well-coached and I think that they're playing with real good passion. It's one of the better defenses we've seen."

Saints quarterback Drew Brees was similarly effusive in his praise.

"Defensively, they fly around. They're very well-coached, disciplined," Brees said. "They are just doing all the things that the great defenses do - getting pressure on the quarterback, good against the run. So really in every facet of what you would say is winning football, championship-caliber football, these guys are doing it right now."

Cowboys coach Jason Garrett cited coordinator Rod Marinelli's work and an infusion of "some good young pieces on all three levels of our defense over the last couple of years" as reasons why Dallas has played well on that side of the ball this season.

"The guys have a good understanding of what we want them to do and I think we play hard," Garrett said. "We're physical, we run to the ball and take great pride in being a great defensive unit."

Meanwhile, each team has a playmaking defensive end in his prime: Cameron Jordan for the Saints and Demarcus Lawrence for the Cowboys. Their linebackers also are led by accomplished veterans in New Orleans' Demario Davis and Dallas' Sean Lee.

New Orleans ranks No. 1 in the NFL against the run, which creates a compelling matchup against Elliott, the NFL's leading rusher.

Some of the Saints' success against the run stems from the fact they've played with large leads, which leaves opponents little choice but to try to come back through the air.

"At the same time, you see the first, opening, couple drives - three-and-outs - limited success in (opponents') run game,'" Jordan said. "There's also been games where we had to play all four quarters, all 60 minutes and even beyond that, and we still come out with the same result."

The Saints have a less flattering No. 30 ranking against the pass, but have been able to counter that with turnovers, such as three in the red zone against Atlanta last week. And they've gotten good pressure on quarterbacks, with 13 sacks in the past three games.

"I don't think quarterbacks are getting comfortable back there," Saints defensive tackle Tyeler Davison said. "There's not space for them to step up. You can't escape on the edges. I feel like when quarterbacks play against us now, they have to have that clock in their head. They know that, 'If I don't get this ball out, something's going to happen to me.' Especially with our offense doing so well, it allows us to pin our ears back and go attack the quarterback."