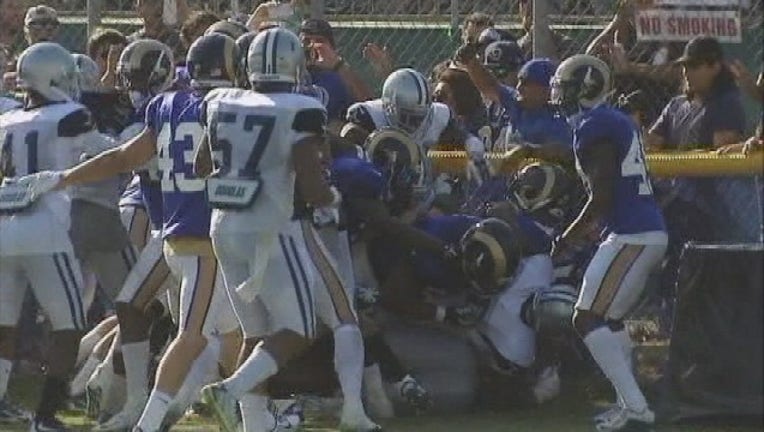 OXNARD, Calif. (AP) — The Cowboys and St. Louis Rams cut short the second of two joint practices at training camp Tuesday after several fights broke out, including one where Dallas receiver Dez Bryant was punched in the face.

The workout at the Cowboys' camp facility ended about 30 minutes earlier than expected after the skirmishes on the field where the St. Louis offense and Dallas defense were scrimmaging.

It was the second time in less than two weeks that a joint practice had to be cut short because of fights. On Aug. 8, Houston and Washington ended the mixed portion of a practice after several fights on both fields.

"I hate it. At the end of the day we know why it happens," said Cowboys executive vice president Stephen Jones, who is on the NFL's competition committee. "I can't imagine that we can't continue to have joint practices and get this right just like we do a lot of things. But we're going to have to continue to emphasize that stuff is not what we want."

Most of the St. Louis defensive players left a drill on the other field when the first fight broke out. The second fight ended with several players in a pile on a fence where fans could reach out and touch them, although no fans appeared to get involved.

The third fight between the Cowboys and Rams included the punch on Bryant and ended the practice, although the Cowboys ran a few more plays with their own players while the Rams huddled with coach Jeff Fisher before walking to their buses.

It wasn't clear who threw the punch on Bryant. Dallas cornerback Tyler Patmon, who fought with Bryant earlier in camp, had several red marks on his face.

St. Louis linebacker James Laurinaitis said he was trying to make a defensive call when he noticed several teammates had left his field and run toward the first fight.

"There's a fine line between defending yourself, so to speak, versus instigating it," Laurinaitis said. "You want to defend your teammates, but you never want it to turn into that. I'm just glad nobody got hurt."

Patmon, who threw the first punch in his fight with Bryant on the fourth day of Cowboys camp, said he wasn't thinking about the fact that he joined the fray without a helmet.

"All you're thinking about is having your teammate's back," Patmon said. "And that's all that matters."

Cowboys coach Jason Garrett, who meets with reporters before the afternoon workout most days at camp, declined to comment after practice. He was asked about fighting earlier when the topic was whether the Cowboys had shown enough intensity in the first joint practice Monday.

"The last thing you want when you bring another team in is to have fights," Garrett said. "We make that abundantly clear with our team. That's not why we're bringing another team in here. It's to get great work against a different group of players and coaches."

Fisher said his team got in good work "for a day and three quarters."

"There's no excuse for it. You can't blame it on anybody," Fisher said. "It's unfortunate about the end. Not going to minimize it, because we're not going to focus on it. We're going to correct it. No place for that in our game."