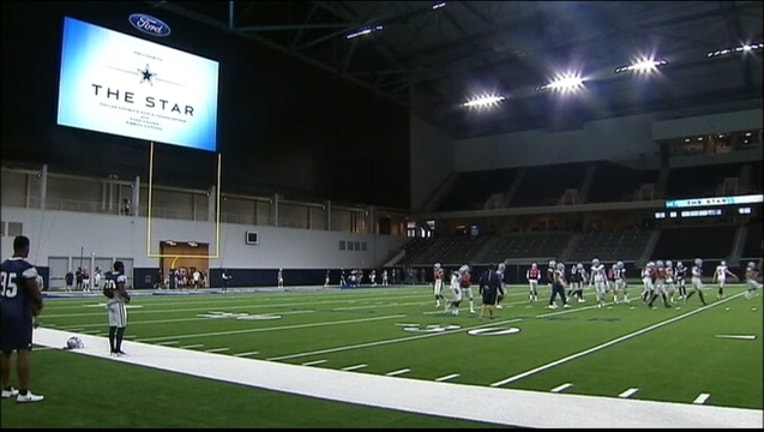 FRISCO, Texas (AP) — Jason Witten glanced overhead at a giant picture of him above the walkway to the new indoor practice stadium for the Dallas Cowboys.

Defensive coordinator Rod Marinelli turned one way through a crowd of media members, only to reappear seconds later going the other way, not afraid to admit he was lost.

The Cowboys had their first workday Sunday at their new practice facility — part headquarters, part spa, part museum with amenities the players probably couldn't have imagined at aging Valley Ranch.

"I mean, words can't describe it," Witten said about the site about 30 miles north of Dallas. "It's an unbelievable facility."

Historical displays from a franchise with five Super Bowl titles are scattered through the football wing and the adjacent headquarters, an office building with a view of the outdoor practice fields on one side.

The cramped training room at the old facility in Irving has been replaced by multiple rooms and rehab pools, including one with a surface that moves up and down to accommodate players limited by movement coming off surgery. It also has underwater cameras for athletic trainers to see a player's feet hitting the surface.

And the football-shaped locker room dwarfs the previous one.

"Probably have to yell if you want to talk to some of the guys down the way," running back Darren McFadden said. "But it's definitely a great layout."

Dallas just finished training camp in California and played the first home preseason game two days before the official move-in to the new headquarters, which was commemorated by a ribbon cutting with owner Jerry Jones and all the dignitaries associated with a project that ultimately will cost more than $1 billion.

While the Jones family celebrated outside, the Cowboys practiced inside in their own place for the first time since the spring of 2009, when a severe storm destroyed their indoor facility at Valley Ranch.

There is still the business of football, an easy thing to forget amid the hoopla.

"I think our guys will get that message today from coach (Jason) Garrett," defensive tackle Tyrone Crawford said. "And if they don't get it from coach Garrett, they'll definitely get it from me. This is nice. Enjoy it for the day. Get the way around the land and then get back to football. That's got to be the message."

The players have a new team meeting room that seats more than 150. Position group meeting rooms have huge TVs, with large murals of previous stars (Troy Aikman in the quarterback room, for instance). "Cafeteria" doesn't seem like an elaborate enough word for a dining facility that will feed the players and host parties.

When they practice outside, the Cowboys will have a turf field and a grass field. The weight room has a great field-level view of both, along with dozens of dumbbells that have the Cowboys' famous star logo on the side.

The lockers have cushion seat backs that open for storage. The helmets are illuminated in small cubicles and would like they were for display only if they didn't have scars from game use on them.

"It's just beautiful," quarterback Tony Romo said. "Until you set foot in this place, you can't appreciate it."

It was easy to forget that the Cowboys have another preseason game in four days (Thursday night at Seattle). And the regular-season opener Sept. 11 at their suddenly secondary $1.2 billion stadium against the New York Giants.

And it was easy to forget that much of the memorabilia already stuffed inside the new facility — with plenty more coming — is from Super Bowl eras now at least 20 years old. The Cowboys last reached the title game 21 years ago, and 31 years since their old home in Irving opened.

"The great thing about Valley Ranch over all those years were the championships those guys formed and won," said Witten, going into his 14th season along with Romo. "That's what you want to create here. All of this is great, but then you have to go and take the next step and that is win football games."

Just give Marinelli a few days to find his office.