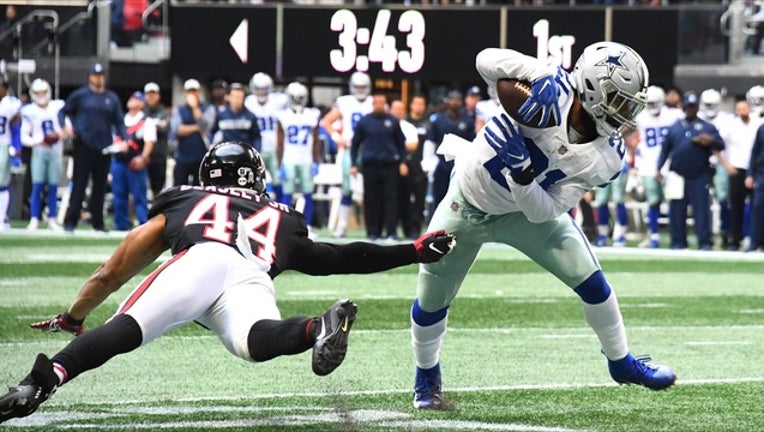 Ezekiel Elliott #21 of the Dallas Cowboys eludes the tackle attempt by Vic Beasley #44 of the Atlanta Falcons during the first quarter at Mercedes-Benz Stadium on November 18, 2018 in Atlanta, Georgia. (Photo by Scott Cunningham/Getty Images)

After playing a huge role in helping the Cowboys thrust themselves into the NFC East race with a win at the Falcons, Elliott will be right in the middle of trying to get them back to the playoffs instead of having to watch a season go south without the 2016 NFL rushing champ.

It's quite a two-game streak to build on for Dallas (5-5): road victories over the past two Super Bowl participants from the NFC, before which the Cowboys were winless away from home and teetering on playoff extinction just halfway through the season.

And it set up a Thanksgiving showdown against Washington (6-4) on Thursday with the division lead on the line.

"That's all that much more reason to appreciate how this team's come together and be where we are right now," owner and general manager Jerry Jones said. "We (Cowboys and Redskins) don't always play for a title, but to some degree, we're playing for it out there Thanksgiving day."

Elliott had two of his five 100-yard rushing games and combined for 388 yards from scrimmage and three touchdowns in wins over the Eagles and Falcons.

Instead of wondering what they'll do without that kind of production, the Cowboys are feeding off growing confidence in an offensive line that is finally absorbing changes and the residual benefits of new No. 1 receiver Amari Cooper, acquired in a trade when Dallas was 3-4 going into its open week.

"We've talked about that for a couple weeks now," quarterback Dak Prescott said. "The way teams are playing us and the way they're playing Amari and adjusting their coverages has given us favorable boxes. The offensive line is doing a great job of taking advantage of that. Zeke's finding holes and making people miss."

Prescott was sacked a career-high eight times in his first game without Elliott last year against the Falcons, the start of a three-game losing streak.

Although the Cowboys won the final three without their running back, the margin for error was gone. A loss to Seattle in Elliott's return eliminated Dallas a year after Prescott and Elliott led the team to an NFC-best 13 wins.

The reward for the current two-game surge is three straight home games, although one-loss New Orleans is the middle opponent. After an extended break following the Saints game, the Eagles visit. Philadelphia's hopes of a repeat are fading coming off a blowout loss at New Orleans.

"We played our way back into this thing, but this one is every bit as big as the last two," executive vice president of personnel Stephen Jones said on his radio show Monday. "So, we got to pull this off and it's great we put ourselves back into a position to be relevant here."

The formula from the two road wins seems to be the best hope for the Cowboys. The defense keeps them in games, as it has done several times this season, while the offense makes the winning plays late.

One of the fourth-quarter TDs against Atlanta was set up by rookie linebacker Leighton Vander Esch's second interception in as many games.

"We're gelling at the right time," Prescott said. "We're complementing the defense. They get turnovers. We're turning them into points and when you do that, you give yourself a chance. We know we're going to be in every game."